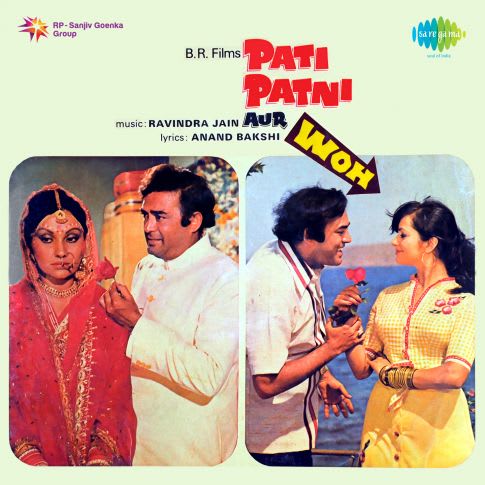 Although a major chunk of the 1970s and 1980s Bollywood music was occupied by stalwarts like Kishore Kumar, Lata Mangeshkar, Asha Bhonsle, Mohammad Rafi, Mukesh, and others, Bollywood also gave scope to other music directors and singers. These singers and directors have also produced countless hits that people listen to even now.

Although there were groups in Bollywood music during that time, they extended support to others as well. One such song produced from such collaboration is the Tere Naam song(तेरे नाम). The song was released in 1978.

The movie of the Tere Naam song(तेरे नाम)

The Tere Naam song(तेरे नाम) is included in the movie album of the movie, Main Meri Patni Aur Woh. The great movie director, B. R. Chopra, directed the film. He was a highly known music director of his time who has made multiple evergreen hits. He was most famous for his television series, Mahabharata. He was also known for his casting skills, which he showed for this movie as well.

In this movie, B. R. Chopra roped in Sanjeev Kapoor, Ranjeeta Kaur, and Vidya Sinha in pivotal roles. All these three actors were extremely famous for their acting skills which they showcased in several blockbuster movies. Even in this movie, their acting prowess lifted the film to a whole new level. Sanjeev Kapoor received nominations for best actor male in the Filmfare award that year for this movie.

The Pati Patni Aur Woh movie was so famous that the film was remade again in 2019 with the same name. The new film starred all-new generation superstars and was directed by Mudassar Aziz and produced by Bhushan Kumar.

The music of the movie Pati Patni Aur Woh

The music director of the movie Pati Patni Aur Woh is Ravindra Jain. He got the support and guidance of the famed lyricist, Anand Bakshi, for all the songs. Ravindra Jain showed his skills in choosing the right singers for the songs. He hired Kishore Kumar, Mahendra Kapoor, Asha Bhonsle, and Poornima to sing the movie’s songs.

The Tere Naam song(तेरे नाम) is a famous song from the movie Pati Patni Aur Woh. It is an offbeat romantic song that is designed on a unique beat. The song’s tune is such that the person makes some offering to his love while singing it.

The song is famous for the actors who acted for it. It was one of the initial days of the concept of cameos in Bollywood movies. Although Sanjeev Kapoor and Vidya Sinha were the lead actors in the movie, the song featured cameo roles from Rishi Kapoor and Neetu Singh. Rishi Kapoor and Neetu Singh was a dream couple during that time, and many directors consider their appearance a proven hit formula. B. R. Chopra felt the same and introduced this unique equation in his movie as well.

The meaning of the Tere Naam song(तेरे नाम)

He also expresses his wish to tell the world about his feelings for her. He believes that his story begins with her name and ends with her. The lines expressing this feeling are Sunle Suru Hota Hai Tujhse Mera Fasana Jane Sara Jamana Khatam Tujhi Pe Hoga Kisi Din Mera Afsana. He also gives the actress the option to finish his life and his story according to her wishes in the lines Teri Khushi Ho Agar, Mar Jau Mai Ye Kissa Tamam Kar Du.

The actor expresses his confusion about other people’s approach to love. He believes that there is no point putting in conditions of love. According to him, expectations and grudges, two expected outcomes of other people’s love, are unnecessary. He also does not find any reason for people to be afraid of love.

The Tere Naam mp3(तेरे नाम) is a sensational song that people used to love in its heydays. Later on, the song became a cult hit amongst the new generation as well. If you love such romantic songs, download the Tere Naam song(तेरे नाम) from the Saregama website right now.