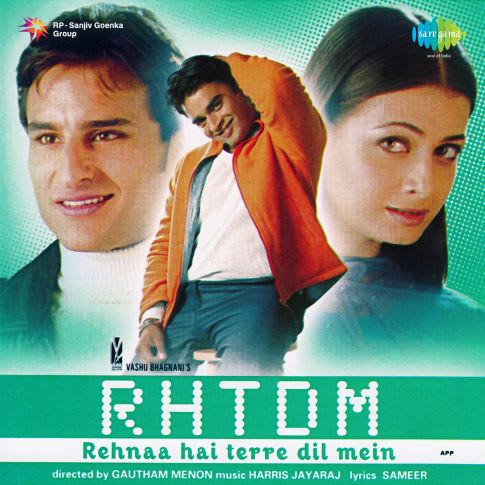 By the year 2000, the romance kings and queens of Bollywood were pretty set. A romantic movie would have meant these familiar faces, and most stories would look like old wine in a new bottle. In 2001, a film with absolutely two new faces created a massive craze amongst all movie lovers. The movie's name is Rehna Hain Tere Dil Mein, casting R. Madhavan and Dia Mirza. The Bollywood debut for both the stars would later go on to achieve some of the brightest accolades in the Bollywood industry through their exquisite piece of art. Amongst all the positive attributes of the movie, the music deserves a special mention. Almost all its songs became instant hits. Among them, the Zara Zara song(ज़रा ज़रा) became an instant hit amongst both the youth and the adults. If you wish to download Zara Zara Song(ज़रा ज़रा), you can obtain it from the Saregama website.

Amongst the various aspects of the movie that has enthralled the audience, the music stood out from the rest. Amongst several romantic hits that came out that year, this music from Harris Jayaraj sounded fresh to the public's ears. No one has heard his name in Bollywood before, and he has only worked in one movie called Minnale ( a Tamil movie). The songs of Minnale became such a hit that the director Gautham Menon decided to make the Hindi remake of it with the same music director. One important point worth mentioning is that Harris Jayaraj, with his debut work, broke the nine-year standing record of A. R. Rahman for winning the Filmfare award-Tamil in the category of best music director. He later worked in famous movies like Aparichit and Ghajini.

The quality of the work produced by Harris Jayaraj was so exquisite that people confused these creations with being that of A. R. Rahman himself. He got all the nominations and appraisals for the songs that he created. He also roped in the best singers at that time to sing those songs. Sonu Nigam and Kavitha Krishnamurthy sang Rehna Hain Tere Dil Mein title track. Oh Mama Mama and Kaise Mein Kahu Tujhse was sung by Sonu Nigam. Shaan sang the Oh Bolo Bolo song. Roop Kumar Rathod sang Dil Ko Tumse. KK poured in all his soul in the song Sach Keh Raha Hain Diwana.

Amongst all these songs, Zara Zara mp3(ज़रा ज़रा) stood tall from the rest. It was the epitome of romance between a young boy and girl at the height of ecstasy. Bombay Jayashree sang the song. She also sang the Tamil Version of the Zara Zara song(ज़रा ज़रा) by the name Vaseegara. She also won the best female playback singer in the Filmfare- south awards.

If you are looking for some romantic songs from the early 2000s, then the Zara Zara song(ज़रा ज़रा) will make it to the top of the list. This song was such a raving hit amongst the public that everyone used to sing its tune at all places. The Tamil version of the song was equally popular, and Harris Jayaraj decided to recreate the same magic in Hindi.

If you look at the Zara Zara Lyrics, you will understand why it was such a huge hit. Such a wonderful work was created by none other than the veteran lyricist of Bollywood, Sameer. The Zara Zara Lyrics represents the epitome of love between a boy and a girl. The girl wishes to be in the arms of the boy and feel his touch on her. She does not want the boy to go away from her. Even the distance between them is calling them to be together.

She compares her love with the monsoon rains and how the boy can play with her hair's wet curls. She imagines being under the same blanket with the boy on a chilly winter night. She expresses her feeling when she listens to the boy's words in the line Tadpaaye Mujhe Teri Sabhi Baatein. The audience can feel the love, eros, and romance depicted in the song. They can portray themselves in the picture and feel the meaning of every word included in the Zara Zara mp3(ज़रा ज़रा). It can be considered a form of pure love as both the girl and the boy have shed all forms of inhibitions and are desiring in exotic conditions. This song is in no way obscene, and no person wanted to create a stir in society on these grounds. The Zara Zara Lyrics has been rightfully accepted in its own form with no adulteration. People have loved this song at the time of its release, and it has become an evergreen hit to date.