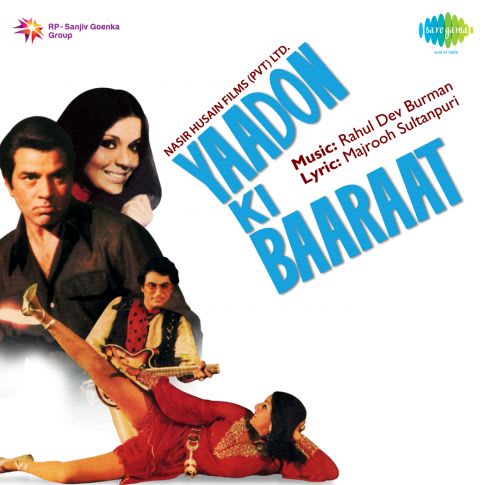 The movie Yaadon Ki Baarat
The movie Yaadon ki Baarat is a cult hit from its release; directed by Nasir Hussain, it had Dharmendra, Tariq, Vijay Arora, Zeenat Aman, Neetu Singh, and Ajit in the lead. The script was prepared by the hit duo of Salim Khan and Javed Akhtar. This bond has stopped producing works now, but they were a stable investment for all producers during that period. The movie Yaadon Ki Baarat is considered to be the first masala film of Indian cinemas. It has all the elements required to make the film a super hit. It can be regarded as the perfect blend of action, romance, drama, thriller, crime, and musical. The movie was also recreated in other languages. You will be amazed to know that superstar Aamir Khan first made his Bollywood appearance in this movie as a child artist.

The music of Yaadon Ki Baarat
As stated earlier, Yaadon Ki Baarat is considered to be a complete package when it comes to Bollywood movies. It is deemed to rake in maximum revenues after its release, and the reality turned out to be the same. The film was the fifth highest-grossing movie in the year 1973. Amongst all its positive attributes, what really stands out is the music. And such an outcome is quite evident when you have the master at work. Rahul Dev Burman is the son of the legendary singer and music director Sachin Dev Burman, although their art style is contrasting in many aspects. Rahul Dev Burman is fondly called Pancham da in Bollywood; he is a hardworking, meticulous, and perfectionist when it comes to his approach. He prepares the music of every song and handpicks the right singer for his songs. He took the same approach for Yaadon Ki Baarat and got the best singers at work.In this movie, almost all the songs were a hit. The title song Yaadon ki Baarat has two parts- Kishore Kumar and Mohammad Rafi sang the male version while the female version was the song of Lata Mangeshkar, Sushma Shrestha and Padmini Kolhapure. Lekar Hum Diwana Dil was sung by Kishore Kumar and Asha Bhonsle, who also sang Mere Soni, Meri Tamanna. R. D. Burman himself sang along with Asha Bhonsle, Kishore Kumar in the song Aapke Kamre Mein Ki Rehte Hain. However, if you are looking for a song with a female lead singer, Chura Liya Hai Tumne Jo Dil Ko(चुरा लिया है तुम जो दिल को) is the one. The song was sung by Asha Bhonsle and the great Mohammad Rafi, with Zeenat Aman and Vijay Arora as actors.

The craze for Chura Liya Hai Tumne Jo Dil Ko song(चुरा लिया है तुम जो दिल को)
If you love melodic, sultry, but not slow-paced songs, Chura Liya hai Tumne Jo Dil Ko(चुरा लिया है तुम जो दिल को) is the best song for you. When the song was released, it became an instant hit amongst the people. Almost all functions and ceremonies are used to play this song. The song features Zeenat Aman playing on the guitar. The legendary singer Asha Bhonsle did justice to the song composed by R. D. Burman. This musical duo has created several timeless hits before and has not disappointed the audience with this attempt. People loved the song so much that besides functions, they used to sing this song to express their love to their beloved ones.Along with Asha Bhonsle, another Legendary singer Mohammad Rafi rendered his voice for the song as well. Mohammad Rafi is also famous for several Bollywood songs in his career of 40 long years. The number of songs he has sung is rumoured to be 25000 to 26000. His voice sounds perfect for the Chura Liya Hai Tumne Jo Dil Ko song(चुरा लिया है तुम जो दिल को), and the audience accepted his performance with the same respect. He sang the part where actor Vijay Arora was filmed.Later on, this song became a cult hit, and many people used to consider it for any performances. Several musical shows and competitions believe that this song to fetch extra brownie points if rendered perfectly.

Chura Liya Hai Tumne Jo Dil Ko Lyrics has been a cult classic soon after its release. Even in 2021, people love to sing the song on any occasion. Many people love to learn the entire song. If you are one of them, you can download Chura Liya Hai Tumne Jo Dil Ko(चुरा लिया है तुम जो दिल को) from the Saregama Carvaan website and enjoy it to the fullest.