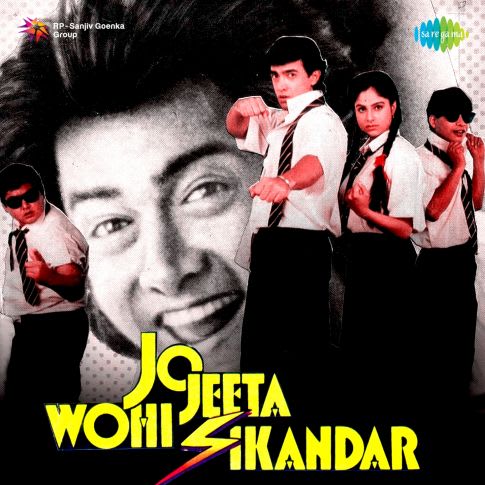 If the 70s and 80s Bollywood is considered the golden period, the 90s and 2000s are considered the period of love. These years saw the emergence of the three Khans- Shah Rukh, Salman, and Aamir, who would go on to rule the industry for the next decades.Among them, Shah Rukh and Aamir were considered the epitome of romance based on several blockbuster romantic hits that they delivered. Their movies not only scored high on the story, acting performance, and cinematography but also on music.One such song that will be considered as the landmark of romance is the Pehla Nasha song(पहला नशा). The song was so popular upon its release that it immediately climbed up to the highest rung of chartbusters for that year. Whenever the song is played anywhere, people use to go gaga about it. Even today, this song is on the topmost ranks when it comes to romantic songs.If you wish to hear the Pehla Nasha mp3, download the Pehla Nasha song(पहला नशा) from the Saregama website.

The movie Jo Jeeta Wohi Sikandar
The Pehla Nasha song(पहला नशा) is from the movie Jo Jeeta Wohi Sikandar. The movie was directed by Mansoor Khan, who cast Aamir Khan and Ayesha Jhulka in the movie. The casting was fresh, and people were eager to look at this new-age school romance. Till then, no Bollywood movie had shown inter-college competitions at such high levels. The movie was a bumper hit of the year, and it restored Aamir Khan's career in Bollywood.

Aamir Khan was not a secure cast as he is now in Bollywood. It was an ambitious move by Mansoor Khan to cast him in this movie. Moreover, he preferred not to portray Aamir as the good boy of all sorts. However, his acting skills came into the picture in this beautiful portrayal of a happy-go-lucky, mischievous school-goer who falls in love several times. Later on, he got determined to win the competition for his school. He was ably supported by stellar performances by other actors like Asrani, Kulbhushan Kharbhanda, Mamik, Deepak Tijori, Pooja Bedi, Ayesha Jhulka, and others.

The music of Jo Jeeta Wohi Sikandar
The Jo Jeeta Wohi Sikandar was a movie that was famous for its music. All its songs were chartbusters of the year. The reason behind such performances was the musical duo of Jatin-Lalit, who directed the music. They were ably supported by the famed lyricist Majrooh Sultanpuri for all the songs. This was the second movie where Jatin-Lalit has shown their caliber, and this movie is considered the launchpad of their careers.Some of the songs in that movie include Yaha Ke Hum Sikandar, Humse Hai Saara Jahaan, Naam Hain Mera Fonseca, Pehla Nasha song(पहला नशा) and many more. The music album of the movie was considered to be the third highest-grossing sale of the year. The movie also received nominations for several categories related to music in different awards that year.

The Pehla Nasha Lyrics
The Pehla Nasha Lyrics was the most popular song of the Jo Jeeta Wohi Sikandar album. The song was the utmost expression of first love and how people feel in it. Soon after its release, it broke several records and later on became a cult song for young couples. If you wish to hear the Pehla Nasha mp3, download Pehla Nasha onto your system.The Pehla Nasha song(पहला नशा) was sung by Udit Narayan and Sadhna Sargam. Both these singers are known for their melodious voices. It was the early days of these two musical maestros, and the outcome of their efforts sounded honey in the audience's ears. You will be amazed to know that the Pehla Nasha song is the first song in Bollywood that has been entirely shot in slow motion. Although this technology has been frequently used in Bollywood nowadays, it was a revelation during those times. The slow-motion effect enhanced the romanticism portrayed in the song.

The meaning of Pehla Nasha Lyrics
The Pehla Nasha Lyrics is the perfect representation of ultimate romanticism. First love is always special for any human being. The song harps on this theme with the perfect use of melody and music. If you wish to experience these effects, listen to the Pehla Nasha mp3. You can now download the Pehla Nasha song from the Saregama website. Whenever teenagers fall in love, they can listen to their partners without them saying anything. They feel that they have found their partners in love. Everything seems to be new and wonderful for them. They even like to wait for someone. The Pehla Nasha song(पहला नशा) perfectly depicts all these emotions. It describes how people feel in the air when they are in love. They feel that there is no distinction between the sky and the land. Even their partner's voice can give rise to a million dreams.If you wish to hear these lovely words with the right pinch of melody, download the Pehla Nasha song(पहला नशा).