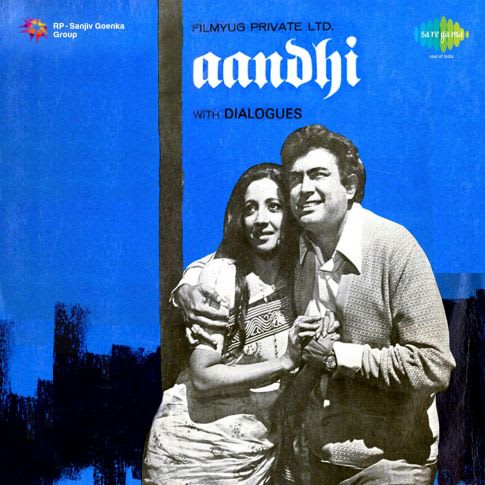 Unlike other political films painted in black and white, Aandhi (1975), directed by Gulzar, is a narrative of a free-spirited woman. It is a saga of love and separation, ego and forgiveness, a vivid depiction of intricate personal relationships. Aandhi is not a political film; politics is just a part of the plot. The film portrays the push and pulls between cravings for authority and heartfelt need for love, compassion, and family. Gulzar's outstanding direction, expressive acting of Sanjeev Kumar, Suchitra Sen, a fantastic soundtrack of R.D.Burman makes the film an epic. Aandhi is about a duo's relationship, how it metamorphoses and strengthens over time, a masterpiece of cinema.

Life is perfect, but lifeless.
Tere Bina Zindagi Se koi song(तेरे बीना जिंदगी से कोई) expresses the yearning and love in an unblemished fashion. The couple (Sanjeev Kumar, Suchitra Sen) is a secret rendezvous sings the song. The lyric of the song penned by Gulzar sab is heart-touching. She says without him, life is perfect, but without meaning, life without a soul. The paradox of Tere Bina Zindagi Se koi song(तेरे बीना जिंदगी से कोई) is despondent; while she says without him, there is no difficulty; simultaneously, she narrates life is not alive. She longs to go far away, following his footprints. She can move to any place if he accompanies her. The only place in this world to find solace is his heart; she wants to weep to melt all the sorrow and sufferings.

But Sanjeev Kumar tries his best not to cry; he is holding his emotion even if his heart is shattering. She can freeze the fleeting moments if he wants the moon to shine forever. Both of them want the night to linger eternally because the reunion is only for the night, not for the rest of life. There is no grumble without you, but life is still, without any destination and meaning. Tere Bina Zindagi Se koi song(तेरे बीना जिंदगी से कोई) is perpetually evergreen; the tune is haunting resonate chords of heart every time you listen. There is something in this world that cannot be described in words, only to experience.

A saga of many loving souls
Every time you listen to Tere Bina Zindagi Se koi Song mp3(तेरे बीना जिंदगी से कोई), you need to plunge into it to comprehend and experience it fully. Tere Bina Zindagi Se song(तेरे बीना जिंदगी से कोई) is a perfect blend of patina in every aspect, the soulful lyrics, the voice, the melody, and stunning picturisation. This song narrates a love story in about seven minutes.It is not a story of two protagonists but a saga of many loving souls. Without imposing any intricate ideas, vocabulary, Gulzar has said many unspoken words. The prose between the Tere Bina Zindagi Se Koi Lyrics gives it another dimension. The couple speaks over the new moon before the third stanza, the moon wax and wanes every fortnight, but this new moon lasted for nine long years?what a prosaic way to describe the unbearable separation.

A touch of genius
R.D.Burman (Rahul Dev Burman) was one of the most talented music directors of the Indian film industry. He was born on 27th June 1939 to the famous father, Sachin Dev Burman. He demonstrated exceptional music composition skills from a tender age and contributed several songs in his father's movies. In the early 20s, he was acclaimed mouth organ, harmonica player, and cast as supportive musical director in several films.

His career as an independent music director started with the film "Chotte Nawab." For three long decades, he composed three hundred thirty-one songs for Bengali and Hindi movies, which are still buzzing in a million hearts of music lovers. Tere Bina Zindagi Se song(तेरे बीना जिंदगी से कोई) in the film Aandhi released in February 1975, penned by Gulzar, sung by Kishore Kumar, Lata Mangeshkar is one of the gems composed by the maestro. Download Tere Bina Zindagi Se Koi song(तेरे बीना जिंदगी से कोई) from the Saregama website to get immersed into the ocean of love. You can also download it in your Carvaan.

Sampooran Singh Kalra, universally known by his pen name Gulzar was born on 18th August 1934 in Dina, Punjab, now in Pakistan. Apart from being an iconic lyricist and poet, he is also an acclaimed filmmaker, writer.

The lyrics composed by this genius sparks poetic distinction and sensitivity, which is unparalleled in Indian cinema. Gulzar started his career as a lyricist in Bandini produced by Bimal Roy. He directed a few art movies like; Parichay, Aandhi, Mausam, and Meera. Gulzar is bestowed with many prestigious awards, including Padma Bhushan in 2004, Sahitya Academy Award 2002; the legendary writer, lyricist, poet won an Academy Award and Golden Globe for "Jai Ho" in the Slumdog Millionaire film. Tere Bina Zindagi Se Koi Lyrics written by him is a tender expression of love and longing.

Kishore Kumar (Abhas Kumar Ganguly) was born on 4th August 1929, in Khandwa Madhya Pradesh; his mother tongue was Bengali. Though he did not have any formal musical training, he was proficient in every genus of music. Kishore Kumar was not only an accomplished singer, an actor; he was deft at playing the piano. He used to be a chorus singer in Bombay Talkies; his debutant film was Shikari (1946), he was only a teen of seventeen. At an earlier stage, his style of singing was heavily influenced by KL Saigal. Kishore Ku8mar sang in 1,198 films adding up 2,678 Hindi songs inclusive of released, unreleased. Tere Bina Zindagi Se Koi Lyrics is undoubtedly a memorable song by the legend.

It is a coincidence; the nightingale of India, Lata Mangeshkar, was also born in Madhya Pradesh, Indore on 28th September 1929. Her father, classical singer Pundit Deenanath Mangeshkar gave musical lessons at render age. The golden voice of Lata Mangeshkar embellishes R.D.Burman's first and last song from Chote Nawab(1961) to 1942, A Love Story in 1994. Download Tere Bina Zindagi Se song(तेरे बीना जिंदगी से कोई) sung by Lata and Kishore will make you fall in love once again and make you remember love is only the answer, even if your heart is shattered.

Love is only the answer.
Download Tere Bina Zindagi Se koi song(तेरे बीना जिंदगी से कोई) from the Saregama website; when you listen to it, you embrace the pensive mood of a classical melodic piece. Even to many music lovers, Tere Bina Zindagi Se song(तेरे बीना जिंदगी से कोई) remains the favourite; you feel the lead cast is not singing it, but with your soulmate humming the tune.