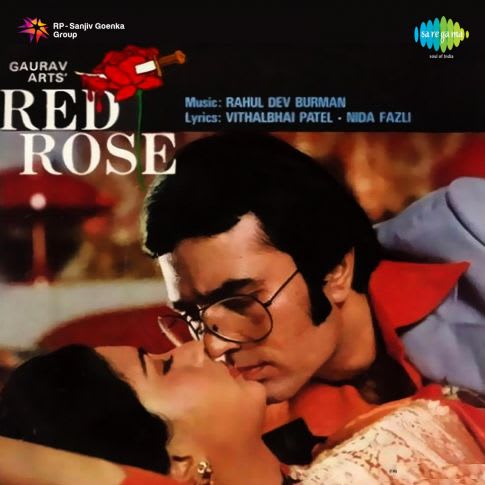 Retro Bollywood music has its own charms. Be it the lyrics, singing style, the melodious voices, the music, everything put together and made it better. These fantastic songs, even today, have a special place in our hearts. Not just the people from that era, but even the younger ones enjoy listening to retro Bollywood numbers. And while we are talking about retro Bollywood or the Bollywood songs in that era, how can we forget the legendary Kishore Kumar and Asha Bhosle. The duo has worked on so many songs together, making them loved by everyone.

Tere Bina Jeena Kya Song(तेरे बीना जीना क्या) is from the movie Red Rose. A very famous psychological thriller. The story revolves around a father-son duo, played by Rajesh Khanna as the son and Satyendra Kapoor as the father. They kill young women and bury them in the garden of their house and grow a red rose over their dead bodies; while chasing one of their victims, the female lead, played by Poonam Dhillon, discover their secrets and try to put them behind bars.

Rajesh Khanna, who needs no introduction, has performed exceptionally well in the movie and Tere Bina Jeena Kya song(तेरे बीना जीना क्या). He is famous by the name of Kaka in the Bollywood industry. He is also referred to as the "first superstar" in the film industry. His achievements are no shorter than the accomplishments of a legend. With having worked in more than 100 movies, 80 out of which were with him a lead role. His very first film Akhri Khat was India's entry in Oscar in 1967. The man has given us superhit movies like Anand, Aradhna, Kati patang, Hathi Mere Sathi, Avtaar, Swarg, Aap ki Kasam, Sacha Jootha, Akhir Kyon. These are just a few examples of the exceptional career of this man. Even today, people use their dialogues in their daily conversations. Superfamous dialogues like "Babumoshay, Zindagi Badi honi chahiye lambi nahi." or be it "Pushpa I hate tears rey."

Poonam Dhillon, who is another graceful Bollywood actress, has left her mark in the industry. Even after so many years, people still remember her exceptional performance in the movie and Tere Bina Jeena Kya Song(तेरे बीना जीना क्या). Poonam Dhillon was the Femina Miss India in 1977, just one of her many achievements. She has worked in films like Noorie, Dard, Romance, Sohni- Mahiwal, Karma and more. She was one of the outstanding actresses in the Indian Film Industry.

Asha Bhosle, the name of a legend who even a kid knows in this country, has given her voice to the beautiful Tere Bina Jeena Kya mp3(तेरे बीना जीना क्या). Asha Bhosle, the second from the talented Mangeshkar sisters, has made her remarkable place in the Indian music industry with her melodious voice. She has sung over 12,000 songs in about 20 different languages and continues to be an inspiration to many young artists.

Kishore Kumar is the name that comes to mind when we talk about the Hindi film industry and singers. His incredibly unique vocals in Tere Bina Jeena Kya mp3(तेरे बीना जीना क्या) tell us just what a talented man he is. Kishore Da has sung more than 2500 Hindi songs in his career span. He is also a music director, an actor and a film director. In his career, he has achieved some monumental milestones. He has won 8 Filmfare's, which holds a record for winning the most Filmfare in the industry. He was also awarded the "Lata Mangeshkar Award" by the Madhya Pradesh Govt.

The music composer or the director for Tere Bina Jeena Kya song(तेरे बीना जीना क्या) is none other than one of the most talented musicians from the industry, RD Burman. He is also called Pancham Da. He was married to the female singer of Tere Bina Jeena Kya song(तेरे बीना जीना क्या), Asha Bhosle. To date, songs composed by him are famous for their extraordinary composition and unnatural yet captivating music. Pancham Da worked on 331 Bollywood films to compose music for them in his career span, and all of those films have had impeccable music by far.

For the romantic in you

Download Tere Bina Jeena Kya song(तेरे बीना जीना क्या) from Saregama and let your inner romantic free. The beautiful lyrics of the song written by Vitthalbhai Patel are perfect for letting someone know of your love towards them. Tere Bina Jeena Kya mp3(तेरे बीना जीना क्या) is such a fantastic composition with such heart fluttering lyrics. When you close your eyes and listen to this song, you can imagine yourself on a beach or in a garden with your loved one completely immersed in the 90's style of romance.

Download Tere Bina Jeena Kya mp3(तेरे बीना जीना क्या) and play it when you're stuck in traffic and let the time go by while humming to the tune of the song. It also helps for relaxing yourself from your overbearing work schedule at home after a long tiring day. Or while you're cooking in the kitchen and dancing and enjoying the music of Tere Bina Jeena Kya song(तेरे बीना जीना क्या).

From the old generation to the new, everyone can dance and enjoy themselves with Tere Bina Jeena Kya song(तेरे बीना जीना क्या) and many others. Explore the Saregama albums and playlists and give yourself the musical treat by downloading your favourite tracks among thousands of masterpieces.

Give yourself a musical break and download Tere Bina Jeena Kya(तेरे बीना जीना क्या) along with your other favourite numbers and enjoy the time with yourself, your loved one, or your entire family.