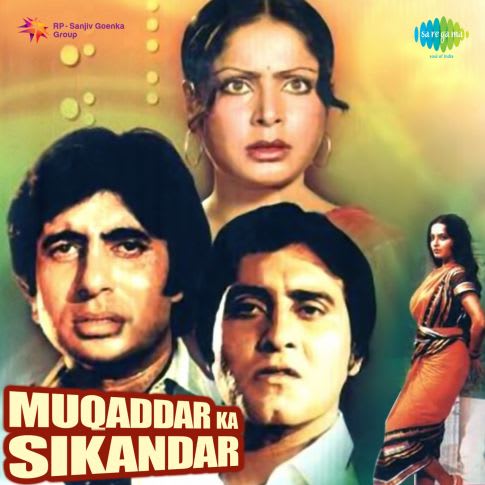 O Saathi Re: The Song of Eternal Heartbreak, Longing, And Love

A song that came out more than 40 years ago and that still manages to break hearts with its simple yet vulnerable lyrics and the deep, soulful voice of the magnanimous star Kishor Kumar. O Saathi Re song is poetry, it is a ballad or just a simple letter of a broken, heart laid bare on the microphone. Regarded as one of the greatest singers of all time; Kishore Kumar lends his voice to one of the legendary actors of all time; Amitabh Bachchan and the result was this deep, tear-jerking, trail of love and loss.

The song was featured in the film Muqaddar Ka Sikandar that was released in 1978, starring a magnanimous cast of Amitabh Bachchan, Rekha, Raakhee, Amjad Khan, Kader Khan, Vinod Khanna, Nipura Roy, Mayur Raj Verma, amongst others under the directorial of Prakash Mehra. The story follows an orphan raised in the slums.

Muqaddar ka Sikandar was the grossing movie of 1978 and the third highest-grossing film of the decade. It was also the biggest Diwali blockbuster of all time. The success of this film however was not contained just to the Indian borders, as this film also turned out to be an overseas blockbuster in the Soviet Union. The mega-success of this film got it nominated in not just one and not just two but nine Filmfare Award nominations including for Best Film at the 26th Filmfare Awards. Along with the epic saga, this film also marked the end of the on-screen pair of two legendary actors, Amitabh Bachchan and actor Vinod Khanna, a pair that was well-loved and adored nationwide for their chemistry.

The plot follows an orphan boy who is raised in the slums and is working for a wealthy merchant. The merchant holds animosity against the boy but his daughter forms a bond with him and shows him compassion. But tragedy and misunderstanding coupled with prejudice fall upon the household and the boy along with his adoptive mother are forced to leave the house. The boy then suffers another loss as his adoptive mother dies and is left with her daughter alone in the world. He is shown to have grown up to be a wealthy man working as a spy for the police and turning in massive criminals with hefty payouts.

The film follows the story of unconditional friendships formed, and old wounds scratched, with familiar faces returning, and a love that never saw the light of the day. Through its plot, the film emphasized the power of chosen family and bonds that last a lifetime even when people don’t. The story as heartbreaking as it was in its plot meets an even more heart-aching ending. This story of unrequited love, unconditional friendships, and family would surely have proven to be a tear-jerker.

Add the eternally soul-touching and deep voice of the legendary singer Kishor Kumar and you’re sure in for a heartbreaking treat of epic plotlines, amazing acting, and heart-touching songs. The simple lyrics of O Saathi Re song display the true and vulnerable feelings of a lonely and broken heart which is well portrayed by Amitabh Bachchan. The song features Amitabh Bachchan standing on the stage and giving an emotional speech, about life, efforts, and that one person who showed him compassion and love when he needed it the most and how he cherishes that person in his heart.

Kishore Kumar’s deep voice is well suited for Amitabh Bachchan’s face and it hooks you right on from the beginning. With Kishore Kumar’s voice, singing the lyrics penned by the famous lyricist Anjaan, under the music direction of the famous duo Kalyanji and Anandji, this song turned out to be one of the most popular sad songs of all time.

You can enjoy the O Saathi Re song right here on Saregama, whether you prefer O Saathi Re Mp3 or HD version, the song is meant to leave you feeling the heartache of the characters and send you back in time. O Saathi Re song is the prime example of the caliber of artists and musicians of the time that is well reflected in their works that shows the perfect balance of music, lyrics, and the singer’s voice all combining to create magic.