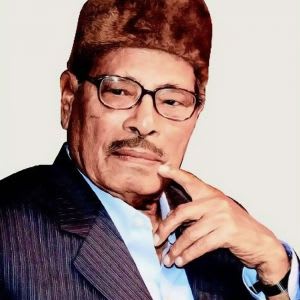 Manna Dey started his career in 1943 with the movie Tamanna and sang a duet with legendary Suraiya. Inspired by his uncle Krishna Chandra Dey, Manna Dey assisted Khem Chandra Prakash and Anil Biswas before deciding to abandon his long-cherished dream of composing music. The playback singer received many awards and felicitations for his contributions, including the prestigious Padma Shri, Padma Bhushan, and Dada Saheb Phalke award. Manna Dey was one of the very few singers who contributed his voice in several languages - Hindi, Bengali, Gujarati, Awadhi, Magadh, Punjabi, Maithilee, Kannada, Assamese, Bhojpuri, Marathi, Malayalam, Konkani, Sindhi, and Chhattisgarhi. Do you want to start your journey of downloading the best of Manna Dey romantic songs and Manna Dey love songs?

Manna Dey's songs were admired by fellow playback singers such as Mohammed Rafi and Lata Mangeshkar as well. "Pyar Hua Iqrar Hua Song'' from Shree 420 remains one of the most soulful and romantic songs Bollywood has ever come across and produced. The movie shatters all box office records in India and even Russia, where Raj Kapoor and Nargis's pair is still adored. Considered to be one of the most successful Manna Dey romantic songs, ‘Pyar Hua Iqrar Hua' is a true example of the vocal artistry and virtuosity of Manna Dey. This song is considered one of the best Manna Dey love songs and Manna Dey romantic songs. It was sung by Lata Mangeshkar and Manna Dey and had music by Shankar-Jaikishan and lyrics by Shailendra.

Who can forget the Qawwali of all Qawwalis? In "Na Toh Karvaan Ki Talaash Hai Song" from Barsaat Ki Raat, Manna Dey, who was sharing the singing stage with Mohammed Rafi, stole the show with inimitable Sargams and Paltaas. The complete command of Manna Dey of the Sufiana journey from the worldly to the spiritual is simply amazing.

If love is the language of two hearts in love, it is hard to miss out on the evergreen classic "Aaja Sanam Madhur Chandni Mein Song" from Chori Chori. This song was sung by Lata Mangeshkar and Manna Dey and had music by Shankar-Jaikishan and lyrics by Hasrat Jaipuri. If you want to go on a nostalgic trip with your special someone, playing Manna Dey romantic songs like this one with hands in hands will turn your meeting into a memory to relish for life. This song deserves a place in every list of the most delighting Manna Dey love songs.

"Ae Mere Zohra Jabeen Song" from Waqt is a timeless classic pictured on the legendary Balraj Sahni. In the picturised version of the song, the young-at-heart Balraj Sahni can be seen showering all praises on his wife. More than fifty years may have passed since the release of this song, but it can still make you hum and tap your fingers to the song's tune. It is a classic act of performance full of melody and deserves to be in every list of the best Manna Dey love songs. The movie had a rich cast of Balraj Sahni, Madan Puri, Sharmila Tagore, Sunil Dutt, Raaj Kumar, Shashi Kapoor, Sadhana, Achala Sachdev, and Rehman. It introduced the concept of making Bollywood movies with multiple stars.

"Jahan Main Jati Hoon" from Chori Chori, sung by Lata Mangeshkar and Manna Dey, is a classic melody wherein the female lead character asks why the male lead character keeps on following her and asks what their association is. A cute and melodious song, this song picturised on Nargis and Raj Kapoor is an ultimate delight to the ears. Undoubtedly, one of the best Manna Dey love songs ever!

When it comes to Manna Dey love songs, you just cannot miss out on this one? How about some flirtatious fun while being surrounded by everyone around? This song, picturised on Nadira and Raj Kapoor, is about someone trying to take shots on a possible relationship. This song was sung by Asha Bhosle and Manna Dey and had lyrics by Shailendra and music by Shankar-Jaikishan. One of the best Manna Dey love songs.

"Chadh Gayo Papi Bichhua Song" from Madhumati is one of the most beautiful Manna Dey love songs sung by Asha Bhosle and Manna Dey and has lyrics by Shailendra and music by Salil Chowdhury. The song is from the 1958 Indian Hindi-language paranormal romance film that starred Dilip Kumar, Vyjayanthimala, and Pran in the lead roles. The movie revolves around the plot wherein a modern man fell in love with Madhumati, a tribal woman. However, they are unable to cultivate a relationship during their lifetimes and then unite after being reincarnated. This movie became one of the most influential and commercially successful Indian films of all time. The movie Madhumati won 9 Filmfare Awards, including the Best Music Director, Best Female Playback Singer, Best Dialogue, Best Film, Best Director, Best Art Direction, and Best Cinematographer. Also, it bagged the National Film Award for Best Feature Film in Hindi. Unarguably, one of the most mesmerizing Manna Dey love songs.