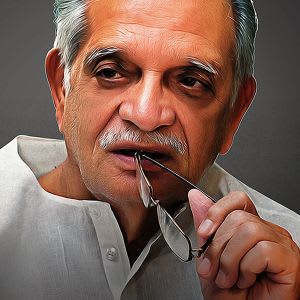 Gulzar is best known in India as a lyricist for songs that form an integral part of Bollywood. He began his career under the directors Bimal Roy and Hrishikesh ... Read More

Born Sampoorna Singh Kalra, Gulzar has given the Bollywood industry and the entire nation a beautiful vocabulary to live and love with. The man who started his illustrious career with Mera Gora Rang Lei Le (Bandini) continues to charm generation after generation with his beautiful and soulful lyrics and brilliance almost six decades later.

Gulzar has many awards to his name, including the prestigious Padma Bhushan, Dadasaheb Phalke Award, Sahitya Akademi Award, Grammy, and the Oscar award for his song, Jai Ho from Slumdog Millionaire. In addition to these awards, Gulzar also has 21 Filmfare Awards and 5 National Film Awards to his credit. Gulzar's passion for creating songs and directing movies ignited after he met celebrated lyricist Shailendra and met Bimal Roy and composed the lyrics for Bandini, which became a phenomenal success.

"Tere Bina Zindagi Se Song" from Aandhi is a masterpiece in the rightest sense. It is often referred to as the saddest song ever, but it is also one of the most beautiful Gulzar hit songs. The song is a perfect illustration of two hearts in love who meet not to stay together but have lived their individual lives without each other. One of the most superhit Gulzar songs, the song talks about the lovers admitting their separation as their only regret in life and confessing all open that life is of lesser meaning without each other's presence in their lives. A must-have in your Gulzar hit songs list! Download this beautiful MP3 song at Saregama now!

"Tujhse Naraz Nahin Zindagi Song" from Masoom is an accurate illustration of life has its own way to throw curveballs at us. At times, you just cannot help but laugh and smile at the miseries thrown at you. Gulzar managed to capture these feelings poignantly with his words; it referred to as his best philosophical song of all time. Sung by Lata Mangeshkar (female version) and by Anup Ghoshal (male version), this song is one of the best Gulzar hit songs deserves the top place in every Gulzar hit songs list.

"Woh Sham Kuchh Ajeeb Thi Song" from Khamoshi is one of those superhit Gulzar songs wherein the words aptly bring out the plight, pain, and sorrow of the central character. It is said that everyone at the recording of this song went emotional and found it hard to keep their eyes dry. The song has music by Hemant Kumar and is sung by Kishore Kumar and is one of the best Gulzar hit songs. Only Gulzar can manage to create a song that beautifully bridges the past and the present. In this song, Gulzar describes a feeling of déjà vu. Listening to this song will make you experience similar things more than once and confuse you about whether what's happening before your eyes is imagination or reality. If you are yet to add this to your Gulzar hit songs list, the time is just perfect now!

If there was one song that can bring a smile down your face even during challenging times, it has to be "Maine Tere Liye" from Anand. This song is about noticing the basic concept of life that all of us should always focus on the experiences that come our way with each passing day and not the number of years added to our lives. "Maine Tere Liye" is the most soulful, painful but optimistic, and mesmerising song that ever came out of the pen of Gulzar. It is an ode to both life and its memories. A must-have song on your Gulzar hit songs list of the most beautiful superhit Gulzar songs. Download this MP3 song at Saregama now!

"Mera Kuchh Samaan" from Ijaazat is unarguably one of the most soulful Gulzar hit songs ever. The song revolves around the plot of the movie where a wife is well aware of her husband's romantic past but wants to start afresh. In an attempt to make her husband's home her own, she decides to send remains of the husband's past relationship to his ex-love. This time the woman instead chooses to ask for some other things that she wants back and sends a list of those items in the form of a letter assuming that the letter will be read by the reader aloud. Incredibly beautiful, one of the most mesmerising Gulzar hit songs you should have in your collection of top superhit Gulzar songs!

There are many reasons for the popularity of this song. Firstly, the lyrics of this song don't rhyme but instead in a free verse. The song also proved naysayers wrong who believed that only Lata Mangeshkar had the skills to pull of a song of such a higher range. Asha Bhosle does complete justice to this song picturised on Anuradha Patel.

This song brings out the burning insecurity of lovers and the apprehension of being forgotten when an end is called on things. In this song, Gulzar pens down that it is literally impossible to return 116 moonlit lights that were spent together by the two hearts in love and talks about that it is impossible to forget the remembrance of things stuck as unforgettable memories. Add this song now to your Gulzar hit songs list. Download this MP3 song now at Saregama to your collection of superhit Gulzar songs!

If you always wanted to download the best of Gulzar songs but could not found the right place to download quality MP3 music, it is time for you to visit the Saregama website or download the Saregama app. If this is not all, you can even bring home the mesmerising Saregama Carvaan and access more than 5,000 evergreen songs and 280 daily updated wi-fi stations to always have your favourite music tracks with you. Don't wait forever. Download the Saregama app and listen to the most memorable songs by Gulzar that can connect with your heart in absolutely no time.