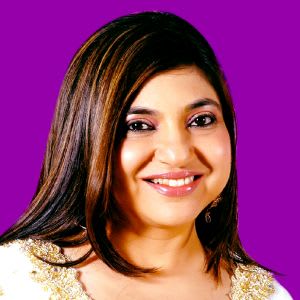 Alka Yagnik (born 20 March 1966 in Kolkata, West Bengal, India) is a noted playback singer in Hindi cinema with a career spanning three decades. She is a record... Read More

Alka Yagnik Romantic Songs - For your special someone

Alka Yagnik got her big breakthrough in Bollywood with the superhit song "Ek Do Teen" from Tezaab after her singing debut in Payal Ki Jhankaar in (1980) which made her an overnight star. The song kickstarted her illustrious career. She sang beautiful Alka Yagnik romantic songs for some of the biggest Bollywood hits, such as Qayamat Se Qayamat Tak, Saajan, Khalnayak, Kuch Kuch Hota Hai, Hum Hein Rahi Pyar Ke, Refugee, Dhadkan, Taal, and Pardes, among more. From the catchy beats of the 1990s to the subtle melodies, Alka Yagnik has seen an era of musical transition in a career spanning more than three decades.

Alka Yagnik, a two-time recipient of the National Film Award, is a record seven-time winner from a record 36 nominations of the Filmfare Award for the Best Female Playback Singer. More than twenty of her melodies were featured in the Top 40 Bollywood Soundtracks of all time. Alka has sung most of her duet songs with Kumar Sanu and Udit Narayan. She has also sung duets with Sonu Nigam, Abhijeet, Hariharan, Vinod Rathod, and Shaan. Alka Yagnik has 2,486 Hindi songs in 1,114 films to her credit. She is the fifth most prolific Bollywood singer of all time after legends such as Asha Bhosle, Lata Mangeshkar, Mohammed Rafi, and Kishore Kumar.

Everyone who has seen the beautiful 1990s has a memory that gets resonated in Alka Yagnik romantic songs. The supremely talented Alka Yagnik won every heart with her melodious voice and remained the most preferred female singer for all music directors in the 1990s with the best of Alka Yagnik best romantic songs.

The movie Himalay Putra may be long-forgotten but the Alka Yagnik best romantic song, "Na Woh Inkar Karti Hai" captured the hearts of everyone, especially the youth then, and continues to be popular. The song, sung by Alka Yagnik and Udit Narayan, was picturised on Akshaye Khanna and Anjala Zaveri and had music by Anu Malik and lyrics by Nida Fazli.

When it comes to the best of Alka Yagnik romantic songs, you just cannot miss out on the Alka Yagnik best romantic song "Mere Humsafar" from Refugee that featured debutants Abhishek Bachchan and Kareena Kapoor as the lead characters. It was one of the most popular songs of the year and stayed at the top of the charts for a long time. The movie was not so popular among the audiences, but Alka Yagnik love songs and music received great appreciation.