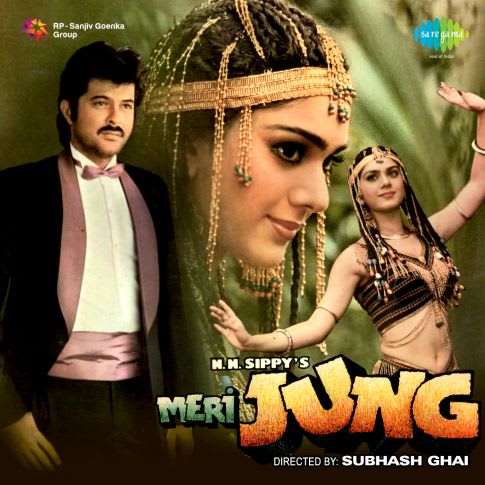 Zindagi Har Kadam Song: The Power of Family And Love

This title track of the film Meri Jung, sung by the legendary singer Lata Mangeshkar and Nitin Mukesh, sets the perfect tone for the movie. The Simple lyrics of the song, penned by the famous Bollywood lyricist Anand Bakshi and composed by the music giant Lakshmikant-Pyarelal is the perfect tune to appreciate the bond of family and the love we receive in our lives.

The song was composed to be used as the title track of the 1985 critically acclaimed box office success Meri Jung movie directed by Subhash Ghai. The film presents a massive cast of actors like Anil Kapoor, Meenakshi Seshadri, Nutan, Javed Jaffri, Amrish Puri, amongst others. This 1985 Indian-Hindi crime-thriller film turned out to be a breakthrough for the actor Anil Kapoor and elevated his footing straight to the big league of actors in the Indian Film Industry and also scored him his first Filmfare nomination for Best Actor. The film was also the debut of the versatile actor Javed Jaffri and is still considered as one of the best performances given by Anil Kapoor. The film scored major success and even got nominated for the Filmfare Best Film category.

The plot follows a family of four and the tragedy that befalls them. The story starts with Anil Kapoor's family (when he was a child) and shows how his parents teach their son and daughter that family is sacred and how important the love of family is and how much power it gives you. But in an unfortunate turn of events, the family suffers great loss and are forced to separate due to the ill fate and the ill intentions of a bigshot lawyer abusing his power.

Anil Kapoor grows up with the seed of revenge in his heart and becomes a lawyer himself closely following his enemy and just waiting for the opportunity to face him off in court. But Anil Kapoor’s life comes full circle with a case that reminds him of the injustice done to his own family. The story follows the bonds of family and friendship, of avenging your loved ones, of uniting family, of love, and hatred and the struggle of life that ensures a happy ending. This movie is a package deal of heartbreak and happiness. It will make you laugh, and it will make you cry.

Zindagi Har Kadam song was recorded as the title track for the movie and the legendary singer Lata Mangeshkar along with the famous playback singer Nitin Mukesh (son of the singer Mukesh) collaborated to compose this heart-tugging song. The singer that needs no introduction that is who Lata Mangeshkar is.

With close to 25,000 songs (not confirmed) under her belt, Lata Mangeshkar has lent her voice to almost every big actress in the industry. Nicknamed the nightingale of India, Lata Mangeshkar has one of those vices that fits any face and blends well in every genre. Be it a Lata Mangeshkar love song, or Lata Mangeshkar sad songs, she just pulls emotions right out of the heart of the listener with her honest and sweet as a syrup voice.

Nitin Mukesh on the other hand has an image of his own. He is a big name in the Indian Playback industry and works the majority of Bollywood songs as well as Bhajans. He has given his voice to famous actors like Manoj Kumar, Shashi Kapoor, Jeetendra, Anil Kapoor, Jackie Shroff, and others and has even done international tours and went on a world tour in 2006 as a tribute to his father, the famous Indian Playback singer Mukesh.

Whether you listen to Zindagi Har Kadam MP3 or in HD version, the simple, yet heavy and powerful tunes and lyrics of the song are sure to suck you right into its world. Enjoy the best of these evergreen melodies and listen to all your favorite songs right here with Saregama.