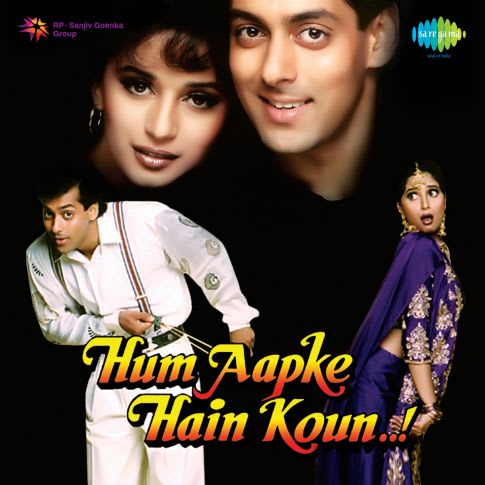 The meaning of the pehla pehla pyar song (पहला पहला प्यार है ) translates into “it is my first love,” which fits nicely into the context of the movie and its plot, which revolves around the story of two brothers, namely Prem and Rajesh. The former is the younger brother of the latter. Due to both the brothers being orphans, their uncle, Kailash Nath, raises them up.

One day, Kailash meets Siddharth, his old friend, and a father to two daughters, namely the caharacters Nisha and Pooja acted by Madhuri Dixit and Renuka Sahahane. The latter is the elder of the two sisters. Both friends decide to wed Rajesh with Pooja. Thereafter, from light hearted bickering, Prem and Nisha don’t realize how they fall in love with each other.

Then comes a twist as events take an unexpected turn after the marriage of Rajesh and Pooja; the latter falls down the stairs and loses her life. Following the unfortunate event, the elders decide to arrange Rajesh’s marriage with Nisha. Though the decision leads to the heartbreak of both Prem and Nisha, they decide to sacrifice their love for the happiness of both families.

In the end, Rajesh comes to know about Nisha’s affair with his younger brother and makes way for their marriage. In the movie, Prem sings the pehla pehla pyar song for Nisha.

The opening lines of pehla pehla pyar lyrics indicate that he falls in love with his beloved. He falls for his beloved for the first time. However, she, despite knowing it, acts as if she is unaware of the fact that Prem is all in love with her. As a result, he wonders what kind of person his beloved is.

In the next few lines of pehla pehla pyar lyrics, the singer talks about the eyes and shyness of his beloved. He gives a moving description in praise of both these attributes. He says that his beloved looks at him through her eyelashes, whereas her shyness indicates her faithfulness towards him.

Thereafter, he reveals the name of his darling as Nisha. According to him, she is “the morning of his life,” and she is unique compared to other women in the world. Going by pehla pehla pyar lyrics, it also becomes clear that she knows that his life is “in her hands.”

The last four lines of the pehla pehla pyar lyrics resemble the first four lines. Thus, it follows the typical pattern of most Bollywood songs. The meaningful lyrics of the song have been one of the reasons for its popularity. Despite being a part of a movie that made its appearance in the 90s, it remains a preferred song among listeners of the current generation.

Download pehla pehla pyar hai song on Saregama to get the feel of its pleasant tone. Saregama lets you download the song in your preferred format for this purpose.

You can download pehla pehla pyar song mp3 from the website by adding it to the cart; or, you can also download it in the HD format from the site by following the same procedure.

If you wish to download other songs or albums along with this one, you do so by availing of an attractive discount. All you need to do is apply the given code on the website.

Listen to pehla pehla pyar online and add it to your cart now!