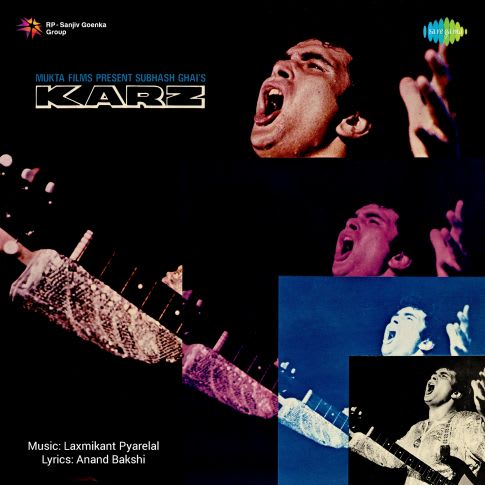 If you do not know the reply to "Kya Tumne Kabhi Kisi Se Pyar Kiya?" and "Kya Tumse Kabhi Kisi ko dil diya?" then you need some serious dose of '80s Bollywood music!

Jokes apart, the song that we bring to you today is a legend and does not require any introduction. We are talking about the Om Shanti Om song (Meri Umar Ke Naujawano) from the 1980 superhit thriller movie Karz. A phenomenal film with an equally impressive album. This piece of art is still remembered and cherished by cinema-goers of all ages. The music of this movie has been used, remixed, and created in numerous ways. But the original still remains the best. How can anyone forget the "la la la la…" which sets the tone for the song? Download Meri Umar Ke Naujawano from Saregama India and relive the youth anthem of the '80s, which created a stir and made Rishi Kapoor a household name.

The movie Karz, which features the Om Shanti Om mp3, was a milestone in the Indian film industry. The amount of attention it garnered was crazy! The storyline, star cast, direction, and music were a class apart. The movie was a classic reincarnation drama with the mighty Rishi Kapoor in the lead, and the leading lady was Tina Munim Ambani. Antagonist Simi Grewal's acting was among her best.

Mere Umar Ke Lyrics is written by Anand Bakshi, another name that ruled the songwriting art for decades. So you see, the Meri Umar Ke Naujawano Song has all the ingredients of a classic superhit Bollywood song. This song has brought the giants together who created something which is just pure magic. And you can experience the magic here at Saregama India, download Meri Umar Ke Naujawano on your phone and enjoy this classic on the go.

Subhash Ghai directed the movie Karz and, like mentioned, it changed the face of Indian Cinema. The songs from its album are timeless, just like the Om Shanti Om song. The album had songs like 'Ek Haseena Thi Ek Diwana Tha' by Kishore Kumar and Asha Bhonsle, 'Main Solah Baras Ki' by Lata Mangeshkar and Kishore Kumar, 'Dard-E-Dil Dard-E-Jigar' by Mohammad Rafi and other such epic songs. The instrumental theme of the movie was quite popular and is still loved by many. The album had a touch of new-age music which is clearly noticed in the Om Shanti Om mp3.

The Mere Umar Ke Lyrics by Anand Bakshi for the Meri Umar Ke Naujawano Song are so youthful, and we can say they are still relevant! When we see rishi Kapoor singing the lines of Mere Umar Ke Lyrics "Ae Pyar Se Badhkar Nahi hai Badhkar Nahi hai rog koi…" We definitely relate to it, and if so, do you go ahead download Om Shanti Om so that you do not miss out on the most loved youth anthem.

The Om Shanti Om song is loved not only in the country, but it is a globally recognized song. The Om Shanti Om mp3 can be heard playing at any corner of the world. That is how much love and recognition it received. The plot of the movie also inspired many others to make movies, like one can not miss out on the resemblance between the plot of the film Karz and Om Shanti Om directed by Farah Khan, which came out in the year 2007. Not just that, the movie was remade in 2002 with the same name starring Himesh Reshammiya. The Om Shanti Om song has also been through many renditions from time to time. But once you download Om Shanti Om from the original movie, you will know why it is a class apart. The music, the voice, the lyrics. Everything just fits perfectly. Om Shanti Om mp3 is available for download at the Saregama website. You can download Om Shanti Om and many other hit songs from all the genres and all the eras that the Indian Music Industry witnessed only at Saregama.

Om Shanti Om mp3 is one of our most liked songs of all time. We are sure you are going to fall in love with the Om Shanti Om song. So go ahead and download Om Shanti Om and enjoy Rishi Kapoor's cult dance moves and Kishore Kumar's charming voice. Do let us know how you liked it!