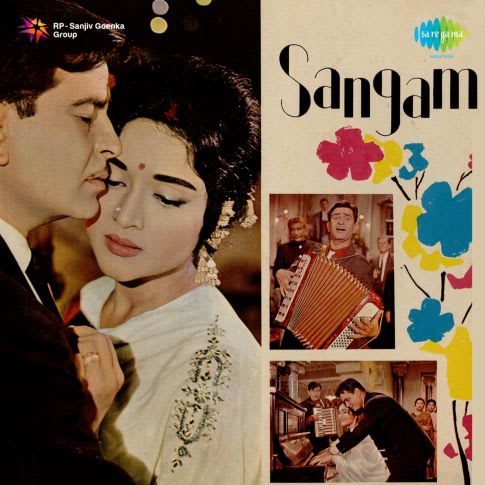 O mere sanam song (ओह मेरे सनम ) is a popular and melodious music track from the evergreen Bollywood movie Sangam that was released in 1964. Two renowned singers, Mukesh and Lata Mangeshkar, have lent their pleasant voices to this tuneful song. The O mere sanam song lyrics are written by Shailendra and directed by Shankar-Jaikishan. The movie features the vetran actors Vyjayanthimala, Raj Kapoor and Rajendra Kumar who have given multiple hit movies on the silver screen.

“O mere sanam” translates into “Oh my beloved” in English. As the name of the song suggests, it is a song addressed to someone’s beloved. Read on to know the meanings of the o mere sanam song lyrics.

The phrase “o mere sanam,” (ओह मेरे सनम  ) which means “oh my beloved,” appears in the o mere sanam song lyrics many times. Not only does it constitute one of the hallmark features of o mere sanam song but it also contributes to its tuneful lyrics.

“Jo tum se hai mere hamdam, Bhagvaan se bhi vo aas nahi” in the o mere sanam song lyrics means what I desire from you o beloved, I don’t desire it even from the Almighty. “Jis din se hue ek duje ke” means the day on which we started living for one another. “Is duniya se anjaan hai ham” translates into we are strangers or unknown to each other.

“Sunate hai pyaar ki duniya me, Do dil mushkil se samaate hai” means it is heard that in the world of love, two hearts mingle with difficulty. “Kya gair vahaa apano tak ke, Saye bhi na aane patate hai” means leave aside the shadow of others, even shadow of our own can’t come there. “Hamane aakhir kya dekh liyaa, Kya baat hai kyo hairaan hai ham” means in the end what have I seen and what is the matter that I am so surprised.

“Mere apne, apna ye milan, Sangam hai ye Ganga Jamuna ka” means our union is the union of Ganga and Jamuna. These are the names of the two rivers in India mentioned in the o mere sanam song lyrics that are highly significant among Indians for both cultural and historical reasons.

On Saregama, you can download o mere sanam song mp3 after listening to its preview. In case you prefer songs in high definition (HD) quality, you can also consider downloading it. You can choose one out of these options, depending on your preferences and the compatibility with your device.

What are you waiting for? Download o mere song and revisit the melodious old song now!