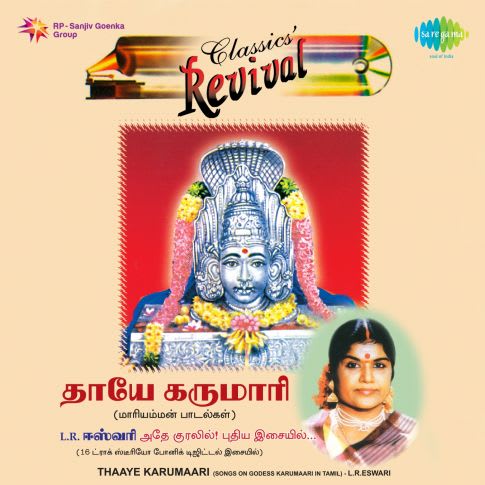 Mariamman, a South Indian goddess for betrayed women, is who the Mariamma Engal Mariamma Song is played for. Mariamman is the Goddess worshipped in the rural parts of Andhra Pradesh, Karnataka, Maharashtra. Just like Draupadi, Mariamman is a divine woman exploited, violated and betrayed by men. Worshipping Mariamman was overlooked for years in the male-dominated society. Mariamman symbolises sacrifices, strength, motherhood, good health and abundance in wealth.

In ancient times, she was prominently worshipped for rain and to bring prosperity. In some folk tales, she is also said to be the sister of Sriranganathar, a form of Lord Vishnu. Mariamman is also said to cure heat diseases like pox or rashes, which makes her quite similar to the North Indian Goddess Shithla Devi.

The maestros who made the song so popular

Mariamma Engal Mariamma song is a very popular song played in most South Indian households. This bhajan was sung by none other than the legendary L.R.Eswari. Eswari has sung over 7000 songs in Tamil, Telugu, Malayalam, Kannada and Hindi. Her voice is suitable for any of the song genres. She has also won the Kalaimamani award, the highest creative award in Tamilnadu.

Eswari has sung so many hit songs like Om Shakthi om, Chellatha, Kasala Kasala, Karumari, Angalamma, Aadi Maasam, Kadavul Thantha, Pathathu Rani and Mariamma Engal Mariamma Song. Her comeback song after a break, Kasala Kasala, became superhit within a few days of the release in 2011. Her popularity in the South Indian music industry is commendable. Her journey in the music industry throughout the years is remarkable.

The lyricist Geethapriyan who wrote the amazing lyrics for the devotional hit Mariamma Engal Mariamma song, was a Kannada film director. His real name was Lakshman Rao Mohite; he went by the pen name Geethapriyan. He has directed over 40 Kannada films and written the lyrics for over 250 Kannada songs. He has also received the Puttanna Kanagal Award for his outstanding contribution to the Kannada Film industry. His famous songs as a lyricist include Love Me Ennuva Vayasu, Balli Hoovigaasare, Muthu Malegagi Hothu Kadide Gopi Lola hey Gopala, Hanumana prana Prabo Raghurama, Maanava Nagrika Maanava almond with Mariamma Engal Mariamma song.

The great Kunnakadi Vaidhyanathan gives the music that gets us moving in the Mariamma Engal Mariamma mp3. He was an exceptional violin player. His hands moved so subtly and softly on the violin that one couldn't believe their eyes. He performed along with great artists like

Ariyakudi Ramanuja Iyengar, Semmangudi Srinivasa Iyer, Maharajapuram Santhanam at the age of 12. His contribution to the film industry was awarded by the title of "Padma Shri".

He worked as a music director for movies like Vaa Raja Vaa, Kankaatchi, Agathiyar, Dheivam, Raja Raja Cholan, Sisupalan, Ula Vantha Nila, Thodi Ragam, and many more Tamil films. He has also given music to a lot of devotional songs, just like Mariamma Engal Mariamma Song.

The deity of the South

Mariamman is the deity of the South. Not many people knew about her before the rural began worshipping her and her legendary tales started spreading.  Mariamma Engal Mariamma Mp3 is sung to please the deity of prosperity, fertility, rain, medicines. Mariamman signifies a lot of strength. She is also prayed to as the Goddess of strength, primarily by women.

Mariamman is said to have both a terrifying as well as pleasing nature. She has fangs and a wild and long mane of hair but is also said to be beautiful and young in appearance. Just like many other deities, she also has many hands where each hand signifies different power. The village where Mariamman resides originally is said to be her village. The people living there believe that the Goddess lived in that village when in her human form.

People all over know Mariamman as many names. Some call her the sister of Mahavishnu, who was called Mahamaya. Some call her Sitala Devi, who is worshipped when children are contracted with smallpox. One such popular myth tells us that she is called Durgamma, the priest's daughter, who was coaxed to marry a man. After marriage, her husband once demanded that he wanted to consume the tongue of a cow. This was when she realised that her husband was a disguised brahmin, which made her furious, and she, in her goddess form, then killed her husband with a sickle. This is where the tale of a betrayed wife started.

Download Mariamma Engal Maiamma song and bow down in devotion to the Goddess of strength and prosperity. This song is enjoyed a lot by older people in the house as they have grown up by listening to these songs and some folk tales of Mariamman.

Download Mariamma Engal Mariamma Song and make it easier for the elders in the house to listen to it every morning and start their day with the blessings of the deity. You can also listen to this song with your children and make them aware of this local deity's legends.