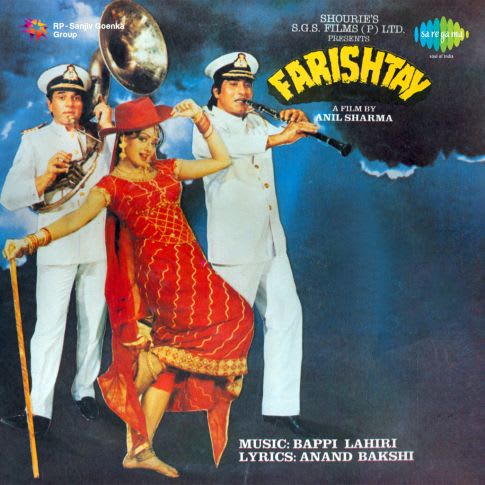 This Raksha Bandhan song deeply reflects the emotions and the bond that a sister shares with her brother and vice-versa. The Bhai Behen Ka Pyar song is sung by two extremely talented Indian playback singers; Amit Kumar and Mohammed Aziz. The Bhai Behen Ka Pyar song perfectly fits into the story of the movie Farishtay that entirely revolves around the bond of siblings and chosen family.

This 1991 Hindi-language film Farishtay was directed by Anil Sharma. The film comprises a star-studded cast of Vinod Khanna, Dharmendra, and Rajnikanth. The plot follows the story of Gayatri who lives with two of her close male friends by the names of Veeru and Dheeru whom she considered as her brothers. Her two brothers are well-known thieves, and cons in their village and are even well known and always in trouble with the authorities. Gayatri ends up falling in love with the new police inspector and her two brothers get her married to him with great pomp.

But in a series of misfortunate events, Gayatri’s husband ends up dying due to a tyrant in a different village and Gayatri ends up losing her mind. She somehow succeeds in getting in touch with her two brothers but is horrified to find that they’re working for the same man who killed her husband. The story follows the bond of siblings and family, packed with drama, heartbreak, betrayal, revenge, and finding your way back to the people that matter the most.

Right from the start, you can see the love and bond between the three characters and the family they’ve found in each other. The movie intensely focuses on family bonds, especially sibling bonds. This is reflected perfectly in how the story continues. The movie covers the sense of belonging, protectiveness, and even betrayal that a sibling must feel and stay true to the theme of the movie.

The simple lyrics of this Raksha Bandhan song tug directly at your heart and makes you miss your sibling with its melancholy music and beautiful score. Aziz has sung over 20,000 songs including Sufi devotional songs. He has also sung duets with numerous famous playback singers like Lata Mangeshkar, K.S Chitra, Asha Bhosle, Usha Mangeshkar, Hemlata, S. Janki, Alka Yagnik amongst others. Mohammad Aziz worked intensely on the movie Farishtay and lent his voice for multiple tracks used in the movie.

Amit Kumar is the other playback singer who collaborated on this beautiful Raksha bandha song and produced something that invokes emotions in people’s hearts with its honest lyrics. Kumar has mostly worked in Hindi and regional film songs including 370 compositions by R.D Burman. In addition to singing in Hindi, Kumar has also sung in Bengali, Assamese, Bhojpuri, Konkani, Marathi, Odia. Not to forget, he is the eldest son of the legendary playback singer and actor Kishore Kumar.

Both of these commendable, and extremely talented playback singers collaborated to produce the ever-emotional Raksha Bandhan song Bhai Behen Ka Pyar. The lyrics were penned by the famous Bollywood lyricist Anand Bakshi and Bappi Lahiri directed the music and composed the score. The result was one of the most deeply honest songs about sibling bonds in the form of this Raksha Bandhan song.