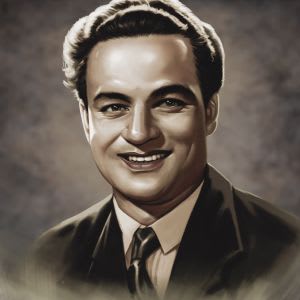 Better known mononymously as Mukesh, was an Indian playback singer of Hindi movies. He, alongside Mohammad Rafi, Manna Dey and Kishore Kumar, left such an impac... Read More

The post-independence period of India will always be considered the golden period of Bollywood cinemas. Several stalwart actors, directors, and singers emerged during this period and provided some evergreen performances that will be etched in the public's memories for a long time. During that time, there was a group of singers who were considered to be the golden group in Bollywood. This group comprises Kishore Kumar, Mohammad Rafi, Lata Mangeshkar, Asha Bhonsle, Mukesh, to name a few.

Of this group, Mukesh was the hit choice for all romantic or sad songs. He has even acted in several movies before and after India's independence. He has enthralled his fans with so many mesmerizing Mukesh ke gane that they will never be able to forget his works. If you are a fan of Mukesh songs, look at the mp3 versions of the Mukesh songs list on the Saregama Carvaan website. You also have the option to download these songs at your wish. Let us look at his life and his contribution, the famous Mukesh songs, to Indian cinemas.

Mukesh was born in Delhi, British India, in 1923. He got his primary training from a music teacher who used to teach music to his sister. His skill was first identified by his distant relative Motilal, who took him to Mumbai (then Bombay) to train him under Pandit Jagannath Prasad. He was first recruited as an actor-singer for the movie Nirdosh in 1941. His first recorded 'Dil Hi Bujha Hua Ho Toh Song', is from this movie. You can download the mp3 version of this early Mukesh song.

Mukesh was a big fan of K. L. Saigal often imitated his singing style. Most of the Mukesh old songs bear a strong resemblance to that of K. L. Saigal's. This was working against his routine, and his friend, the great music director, Naushad Ali, helped him come out of it. He later developed his own singing style and has won several accolades for it.

The musical career of Mukesh

Mukesh has been famous as both an actor and a singer. He began both of his careers together in the movie Nirdosh. Later on, he became a renowned playback singer. He has sung songs for several stalwart actors like Raj Kapoor, Dilip Kumar, Sunil Dutt, Feroze Khan, Manoj Kumar, etc. He has won four Filmfare awards in 1959, 1970, 1972, and 1976 and was nominated several times. Winning the Filmfare award amidst musical stalwarts like Mohammad Rafi, Kishore Kumar, and Manna Dey was a daunting task. He even won the National award for Best Male Playback singer in 1974.

Mukesh did not restrict himself to Bollywood music; you will find several Mukesh ke gane in other languages as well. He has even won the prestigious Bengali Film Journalists Association Awards three times.

Mukesh has been famous for his long list of sad songs. When people remember Mukesh ke gane, the first songs that come to their mind are the sad ones. Movies like Hanste Aasoo have sad Mukesh songs like 'Dil Rote Rote So Gaya Song' and 'Dil Toot Ke Bola Song'. Even in the film Roomal, songs like Dil Toota Aur Armaan Toote and Ae Rote Huye Sawan make the long sad Mukesh songs list. In the film, Malhar, he has sung the famous song Dil Tujhe Diya Tha Rakhne Ko. If you love to hear Mukesh songs of the sad genre, you can search for the mp3 versions of these Mukesh Kumar songs on the Saregama Carvaan website. Once you find these songs, download them so that you can listen to them offline as well.

The sadness and poignancy embedded in Mukesh's voice are not the only attributes he expressed in Bollywood music. People also remember him through several romantic Mukesh ke gane. His song, Ab Der Na Karo Saajan, from the movie Dukh Sukh is one of the famous Mukesh old songs. One of the most famous romantic Mukesh songs includes 'Kabhi Kabhi Mere Dil Mein Song' from Kabhi Kabhi. Another Mukesh Kumar song that is worth mentioning is Kya Khoob Lagti Ho from the movie Dharmatma. In the path-breaking movie Sangam, he has rendered his voice for the song 'Har Dil Jo Pyaar Karega'.

Even in 2021, people love to hear Mukesh old songs. If you consider yourself a Mukesh fan, make your own Mukesh songs list and search for them on the Saregama website.

Along with sad songs, Mukesh has shown another side of his skill in some of the happy Mukesh Kumar songs. For example, the Mukesh old songs from the movie Lady Killer have a chirpy nature to them. Some of the movie songs include Auron Ka Chehra Paon Tera and Chacha Ne Chachi Ko Chandni Se. Another chirpy Mukesh song is Bevdo Peene Bhai.  You can sit down all day long and listen to funny, fast beat Mukesh ke gane.

Aarti and Bhajan based Mukesh songs.

Mukesh Kumar has shown his prowess in different religious songs like Aarti and Bhajans. One of his famous Aarti is 'Anand Mangal' (Gayatri Atri). His list of bhajans is endless. He has sung bhajans in different languages. Some of his wonderful bhajans include Ram Kare So Hoye Re, Tune Raat Gavai Soi Ke, Prabhu Ka Naam Japo Man Mere, Ram Ram Ram Naam Rut Re, to name a few. Many of the Bhajan Mukesh songs are being used in different religious gatherings even today. If you love to hear the mp3 versions of these Mukesh Kumar songs, download them from the Saregama website now.

The skill and work of Mukesh will always be etched in the memories of all Bollywood lovers. They loved him when he was alive and performing and still love him through his songs. His legacy is continued by his son Nitin Mukesh and grandson Neil Nitin Mukesh. If you love these Mukesh old songs, get one copy of each of them now.