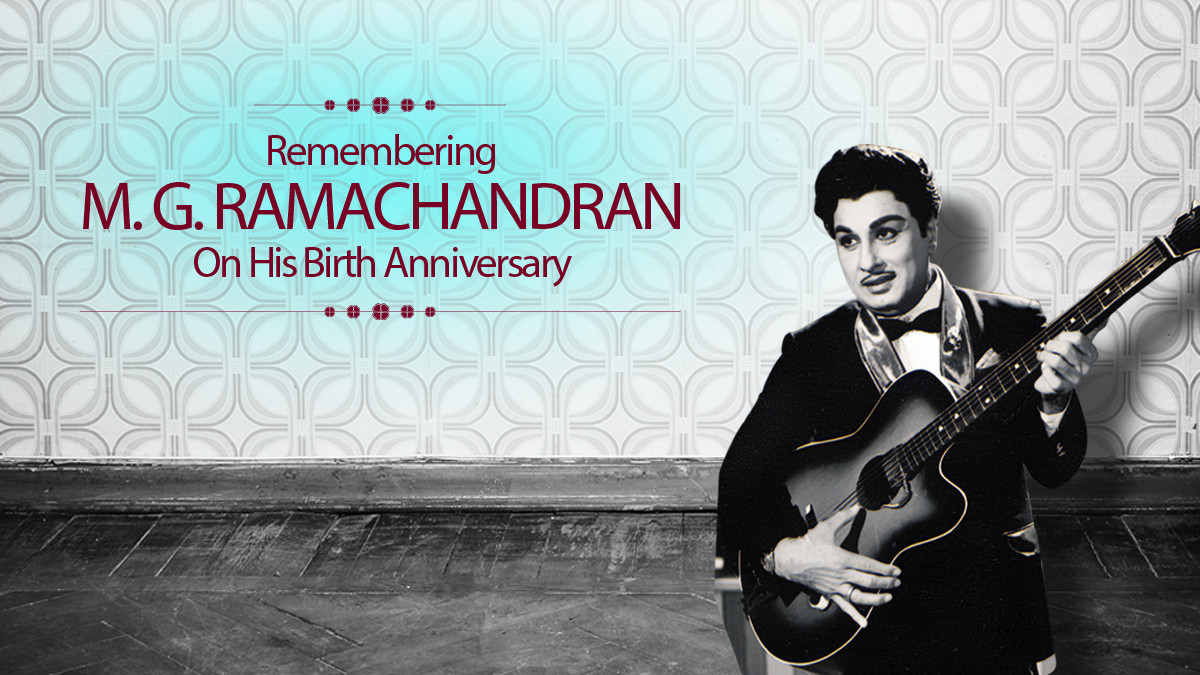 Marudur Gopalan Ramachandran was an Indian actor, filmmaker, and politician known for his work in the Tamil industry. In Tamil Nadu, he was popularly known as “Makkal Thilagam” (People’s King). Known as MGR, he made his film acting debut in the 1936 film Sathi Leelavathi. His first leading role came in the 1950 film Manthiri Kumari. The film was written by M Karunanidhi, a famous writer, and politician who served as Chief Minister of Tamil Nadu for almost two decades. Nonetheless, it was MGR’s 1954 film, Malaikallan, which won him the President’s Silver Medal, which cemented his place among the top Tamil heroes of the era.

Tamil film industry underwent a significant transformation during the 1940s and 1950s. Annadurai and Karunanidhi produced various films and were part of the Dravidian movement. In the ’80s, MGR played multiple characters in the movement. Some of the M.G Ramachandran songs are inspired by the Dravidian Movement, which we have in our playlist for you to enjoy.

Annadurai became one of MGR’s close friends during his film career. In 1981, he joined the Dravidian political party DMK, led by Annadurai. DMK came under the leadership of Karunanidhi following the death of Annadurai. In response, MGR formed the ADMK. As Chief Minister, MGR looked after Tamil Nadu from 1977 to 1984 under the ADMK, which later became AIADMK. As one of the most influential film and political figures of Tamil Nadu, MGR dominated the state. For his contribution to Film and Politics, MGR received the Bharat Ratna posthumously from the Government of India in 1988.

We at Saregama tried to honor his legacy by creating a playlist of evergreen M.G Ramachandran songs.

MGR was a phenomenon in the Tamil Film Industry. His movies are still most watched by Tamil movie lovers. One such film is Chakravarthi Thirumagal; it was a hit and crossed 100 days in 8 centers. Some M.G Ramachandran songs from Chakravarthi Thirumagal that you should add to your playlist are Sollalae Villakkath Theriallae by P. Leela and S. Vara Lakshmi. The song is so melodious that you cannot miss it. Others are- Kannalane Vaarunga by Jikki, Aththanum Naanthane Aththanum Naanthane by S.C. Krishnan and T. V. Ratnam, Urangaiyile by Dr. Seerkhazhi and S. Govindarajan, Aada Vaanga by Jikki by P. Leela, Yematram Thaana by S. Vara Lakshmi, Sollale Vilakka Theriyale by P. Leela, and S. Vara Lakshmi. These M.G Ramachandran songs are as legendary as MGR himself. So do not forget to listen to Chakravarthi Thirumagal on Saregama and Saregama Carvaan.

Mannathi Mannan is an Indian film directed and produced by M. Natesan in 1960. The film starred our very M. G. Ramachandran, Anjali Devi, and Padmini. The film was written by the very famous Tamil writer Kannadasan and had the musical score composed by the duo of Viswanathan–Ramamoorthy. Some of the finest M.G Ramachandran songs are in the album of this movie. Kalaiyodu Kalanthathu by M.L Vansanthkumari is a very refreshing song that should definitely be a part of your M.G Ramachandran songs list. Some of the other tracks from the same movie you should listen to are Kaviri Thaaye by K. Jamuna Rani and Kangal Irandum by P. Susheela. There are so many M.G Ramachandran songs that are sure to entice you and take you back to the early times of Tamil cinema.

MGR acted in a lot of movies with Jayalalitha as his leading lady and delivered a total of 28 hit films at the box office. One movie that stands out in its soundtrack is Nam Naadu. It was a remake of the 1969 Telugu film Kathanayakudu and became a blockbuster at the box office. The music was composed by M. S. Viswanathan and some extremely melodious tracks like Aadai Muzhuthum by P. Susheela, Nalla Perai by LR Anjali and SN Shobha, Vaanagayya Vaathiyaariya by P. Susheela and T.M. Soundararajan, Ninaitthadhai Nadatthiyae and Naan Yezhu Vayasile by L.R. Eswari, Mosam Pogathe by M.L Vasanthkumari and Naan Paadum Paadal by LR Anjali and SN Shobha.

These M.G Ramachandran songs are a reminder of why MGR is still regarded as a cultural icon in Tamil Nadu and as one of the most influential actors of Tamil cinema. We have tried to compile all of his hits for you to enjoy.

Some of the M.G Ramachandran songs that should definitely be a part of your playlist are- M.L. Vasanthakumari and T.M. Soundararajan voiced the song Aadatha Manamum from the movie Madurai Veeran. The music of Madurai Veeran was composed by the famous G.Ramanathan. Another brilliantly crafted song is Aadivarum from the movie Thaai Magalukku Kattiya Thalli. The song is sung by K. Jamuna Rani and Dr. Seerkhazhi S. Govindarajan. Though the film couldn’t get the attention it deserved, the songs are mesmerizing, as MGR himself. So the tracks from this movie must be a part of your M.G Ramachandran songs list. A few more of his memorable songs are Ondralia Indralia by Dr. Seerkhazhi S. Govindarajan, Chinnanchiriya by Jikki, and T.M. Soundararajan Thanjaavooru Bommai, and Theriyaatha by L.R. Eswari and P. Susheela.