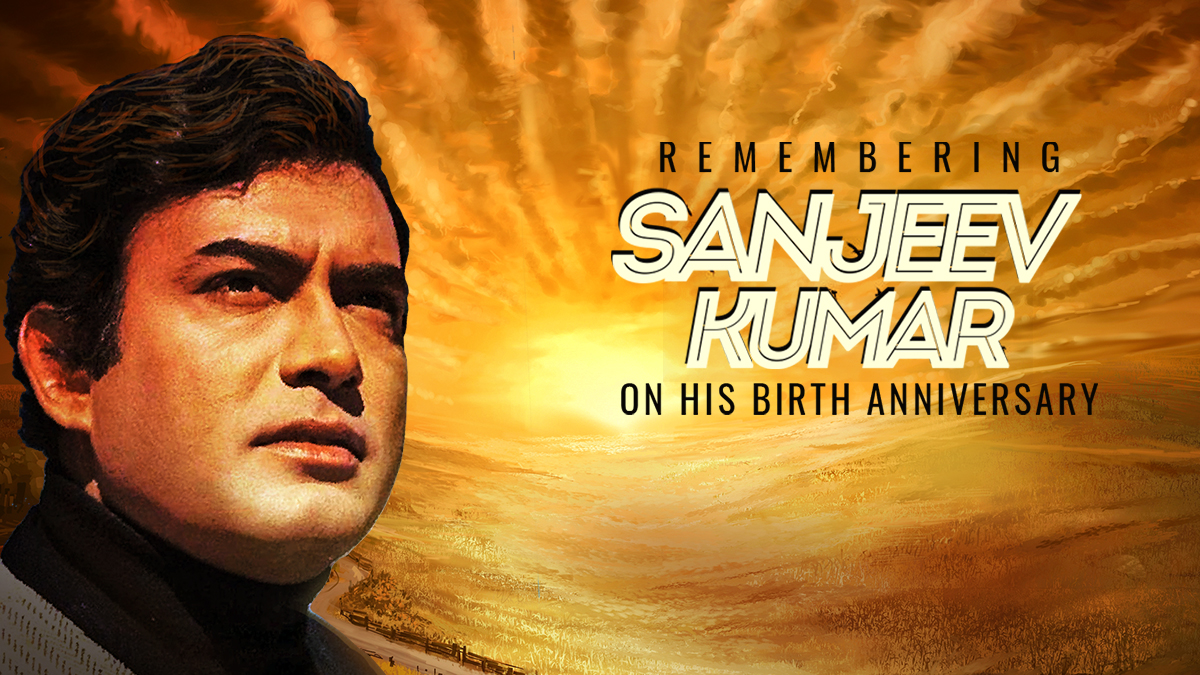 From romancing his lady love to mysterious thriller, Sanjeev Kumar is considered to be one of Bollywood greatest gems of all time. An actor who didn’t mind taking up non-glamorous roles that were well beyond his age, Sanjeev Kumar never turned from an interesting role, however simple it might have been. He is also fondly remembered for his versatile acting that gave us one after another super hit films. Whether it was romance, comedy, thriller, or anything else, the robust acting of Sanjeev Kumar has well left its mark on the industry.

On the Occasion of Sanjeev Kumar Birthday, Saregama Tweeted “Remembering one of the greatest actors of his time Sanjeev Kumar on his birth anniversary.”

Born on the 9th Of July 1938 as Harihar Jethalal Jariwala to a Gujarati family in Surat. He moved to the City Of Dream; Mumbai when he was very young and his career in Bollywood has an interesting start. As iconic as it might have been, a stunt in the film school led Sanjeev Kumar to Bollywood, where his versatile acting was widely loved and praised by critics and audiences alike.

Even while doing theater, Sanjeev Kumar had a penchant for taking up older roles. His debut film was Hum Hindustani in 1960 where he played a small role. His first leading role was in the film Nishan (1965). After his start, Sanjeev Kumar went on to work with some of the leading artists of the time like Dilip Kumar, Shammi Kapoor, Sadhana, Aruna Irani, Jaya Bhaduri, and L. Vijayalakshmi.

At one point Sanjeev Kumar was so in demand that Tamil film directors wanted to make remakes with either Sanjeev Kumar or Rajesh Khanna. It was this that raised his popularity amongst the audiences. Another talent of Sanjeev Kumar that was widely praised was his sense of excellent comic timing which he showcased in movies like Seeta Aur Geeta, Pati Patni Aur Woh, Angoor, and Hero.

Sanjeev Kumar had no shortage of accolades and awards in his name. He won two National Film Awards for Best Actor for movie Dastak (1971) and Koshish (1973) and he was also nominated 14 times for Filmfare Awards, thrice as Best Supporting Actors which he won once, and the rest as Best Actor that he won twice. He also won the BFJA Award for Best Actor in 1974, the Kalashri Art and Network “Lifetime Achievement Millenium 2000 Award” at Surat, amongst a dozen other awards. Not just this a road and a school in Gujarat has been named after him, India Post-release a post stamp with his likeness in 2013 to honor him.

Even though he was an actor that played elderly roles, Sanjeev Kumar died before he reached 50; the irony of his death wasn’t lost on anybody. After suffering his first heart attack, Kumar underwent Bypass surgery in the US. However, on November 6th, 1985, at the age of 47, he suffered another massive heart attack that resulted in his demise. More than 10 movies were released after the actor’s demise the last one being Professor Ki Padosan in 1993.

On the occasion of the actor’s 83rd birth anniversary, Saregama celebrates his works and his contribution to the Indian Film Industry.

Now you can stream and download all your favorite songs starring Sanjeev Kumar on Saregama Carvaan. Saregama Carvaan is a portable audio speaker with preloaded 5000 evergreen Hindi songs that you can listen to anywhere anytime without ad breaks or internet connection. It consists of other features like Bluetooth, FM/AM radio, USB, and AUX connectivity.

Wishing a Happy 48th Birthday to Kailash Kher: The Man Who Redefined Sufi Music in Bollywood