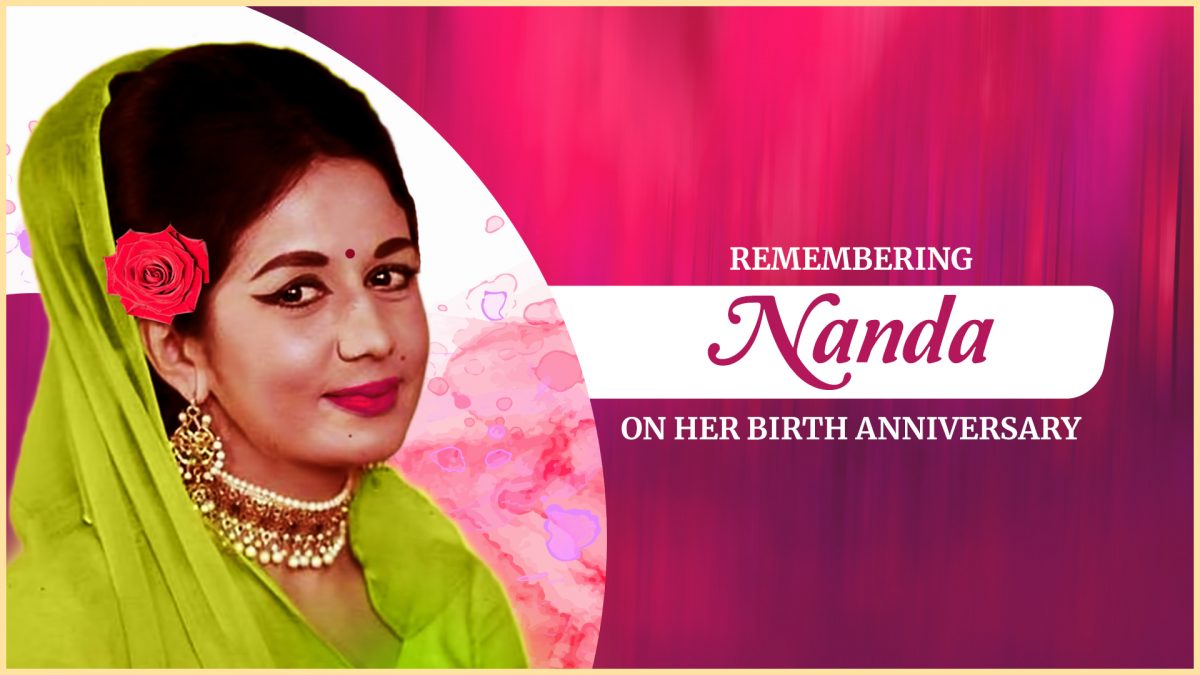 Nanda Karnataki or popularly known as Nanda was an Indian film actress who predominantly appeared in Hindi and Marathi films. Nanda was one of the most popular actresses in Hindi cinema of her time. With a career spanning over 30 years, she is best known for her performances in Chhoti Bahen, Dhool Ka Phool, Bhabhi, Kala Bazar, Kanoon, Hum Dono, Jab Jab Phool Khile, Gumnaam, Ittefaq, The Train, and Prem Rog amongst other roles.

Nanda was born on the 8th of January 1939 in a Maharashtrian show-business family to Vinayak Damodar Karnataki, a successful Marathi actor-producer-director. Vinayak Damodar passed away when Nanda was only seven years old. The family faced hard times after his demise following which Nanda became a child actress, helping her family by working in films in the early 1950s.

Nanda Karnataki made her debut in the 1948 film Mandir. On the silver screen, she was first recognized as “Baby Nanda”. Following Mandir, she worked in movies like Jaggu, Angaarey, and Jagriti, playing child roles from 1948 to 1956. As a result of her involvement in movies from a young age, her studies suffered, and she was homeschooled by a renowned school teacher and Bombay Scouts commissioner Gokuldas V. Makhi. By working as a child artist and making a career in films, Nanda Karnataki supported and educated her six siblings with her savings.

She played the title role in L.V. Prasad’s Chhoti Bahen 1959 film. The movie was a big commercial success, making her a star. In the film, Nanda played the role of the blind younger sister looked after by two elder brothers, played by Balraj Sahni and Rehman. Following that Nanda was also the heroine in B.R. Chopra’s Kanoon in1960, a film with no songs, which was then rare.

She won the Filmfare Best Supporting Actress Award for her role in Anchal in 1960. She paired with Raj Kapoor in Aashiq in 1962 following that commercially successful film and she worked with Rajendra Kumar in three films – Toofan Aur Diya in 1956, Dhool Ka Phool in 1961, and Kanoon in 1960.

During her career, Nanda was known to encourage newcomers. She signed eight films with Shashi Kapoor at a time when he was yet to become a successful actor. Their first two films as a pair were the critically acclaimed romantic films Char Diwari in 1961 and Mehndi Lagi Mere Haath in 1962. Gumnaam in 1965 paved her way to the top of the industry.

After her career, Nanda went on to live in her Mumbai residence and became kind of a recluse. She kept her interactions limited to only with family and close friends. Her close friends from the film industry included Waheeda Rehman, Helen, Nargis, Saira Banu, Asha Parekh, Mala Sinha, Sadhana, Shakila. After a long time ever since she retired, Nanda made a rare public appearance with her close friend and fellow actress Waheeda Rehman for a screening of the Marathi film Natarang in 2010.

Four years later, unfortunately, the actress passed away in Mumbai on 25th March 2014 at her Versova residence, aged 75, following a heart attack.

On the occasion of Nanda’s 83rd birth anniversary, Saregama celebrates her life and contribution to Hindi cinema.

Now you can stream and enjoy all your favorite Nanda songs on Saregama Carvaan. Saregama Carvaan is a portable digital audio player that comes with 5000 preloaded evergreen Hindi songs that you can enjoy anytime without ad breaks or internet connection. It also consists of other features like Bluetooth, USB, and AUX connectivity.

Wishing the Powerhouse Singer, Sukhwinder Singh on his 50th Birthday