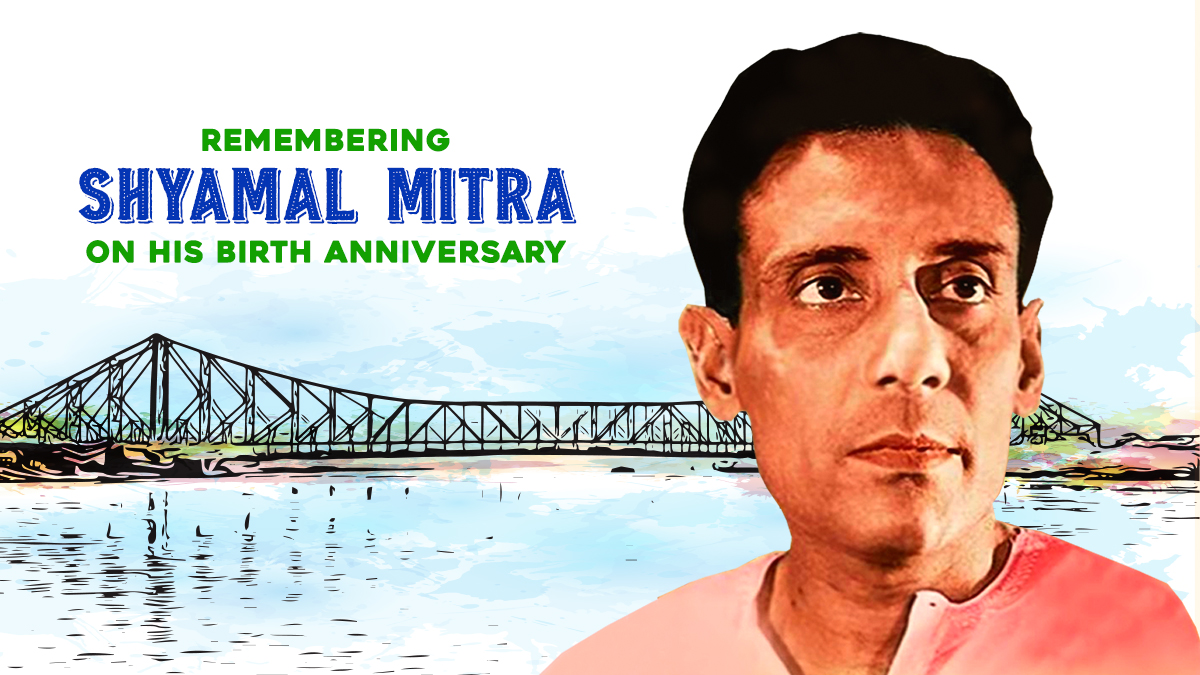 Shyamal Mitra was one of the most popular singers of Bengal during the ’50s to early ’70s. He had a unique voice and was one of the most favorite romantic singers. Nearly all the composers of that time composed some unforgettable songs for him. His interpretation and delivery of songs such as ‘Jodi kichhu amaarey sudhaao’ and ‘Dur noi besi dur oi’ is sheer magic. Along with Hemanta Mukherjee and Manna Dey, he was the most notable singer. He also had a fair amount of success as a music director.

Shyamal Mitra’s voice was unique with a good baritone, reflecting a range of emotions and being mysterious. He was also an accomplished composer. One famous Shyamal Mitra song composition is “Ei sundor prithibi chheDe.”

Shyamal Mitra was born in Naihati, a city near Kolkata. His father wanted him to follow in his footsteps and become a doctor, but Shyamal Mitra was very keen on music and was always inspired by his mother and the local singer Mrinal Kanti Ghosh.

Shyamal Mitra started working as a singer and music composer for the Bengali industry. During the fifties and early sixties, he composed music for hit films like Joy Maa Kali Boarding, Jamalaye Jibonto Manush, and Bhranti Bilash. He also worked as a playback singer in many Bengali movies during this period.

In 1963, he produced a film called Deya Neya, another milestone. Then he made more films like Rajkanya, Kheya, and Ami Se O Sakha. He was also the distributor and producer of “Garh Nasimpur.”

Shyamal Mitra has been associated with All India Radio for a long time. Additionally, he sang in the Mahisasura Mardini program on All India Radio. That song was “Subhra sankha robe” with Arati Mukherjee and Ashima Mukherjee co-artists.

As we celebrate his birth anniversary, let us look back at some of Shyamal Mitra songs that are still in the hearts of every music lover, especially from Bengal.

Bonpalasir Padabali, a Bengali romance drama film directed and produced by Uttam Kumar. The soundtrack featured many Shyamal Mitra songs. Aaha Mori Mori, Bhola Mon Moner Katha, Dekhuk Para Porshite, Dhin Kete Dhin Dhin Ta, and Amar Monta Tane are some of the songs sung by Shyamal Mitra for the movie. He also directed the music for this movie. Some of the Shyamal Mitra songs featured him as a music director from the same film: Biye Korey Anbo Ebar, O Tor Nijer Sukher Tare, and E Noy Phoolsajya by Adhir Bagchi. Amar E Path by Dwijen Mukherjee, O Bhaber Nagari by Manna Dey, and Swapna Dasgupta. All these tracks are a must in your Shyamal Mitra songs playlist.

Andha Oteet is a Bengali thriller drama film directed by Hiren Nag and produced by Asim Sarkar. The movie starred Uttam Kumar, Supriya Devi, Kali Banerjee, and Swarup Dutta. Our very own Shyamal Mitra directed the music. Some of the Shyamal Mitra songs from Andha Oteet that you should download and listen to are- Mon by Arti Mukherjee and Aaha Neel Neel Taragulo by Shyamal Mitra himself.

Pratibad was Shyamal Mitra’s one of most successful movies as a music composer. One song from the movie that should definitely be a part of Shyamal Mitra songs playlist is Amar Praner Majhe Sudha (Pratibad) by Sudha Mukherjee. The song is very melodious, and you are sure to fall in love with the music.

Shyamal Mitra was a legendary part of Bengal’s rich musical history. But he did not restrict his talent to just Bengali music. He has rendered playback for hundreds of Bengali films and Assamese, Oriya, and Hindi films. All Shyamal Mitra songs are available on Saregama for you to download and listen to.

Shyamal Mitra passed away on 15 November 1987, leaving behind a legacy that his son Saikat has beautifully carried forward. He sings Bengali songs composed mainly by his beloved father, Shyamal Mitra.

Kaifi Azmi’s Birthday - A Musical Tribute to the Legend

Remembering The Cowboy Of Bollywood, Feroz Khan On His 83rd Birth Anniversary