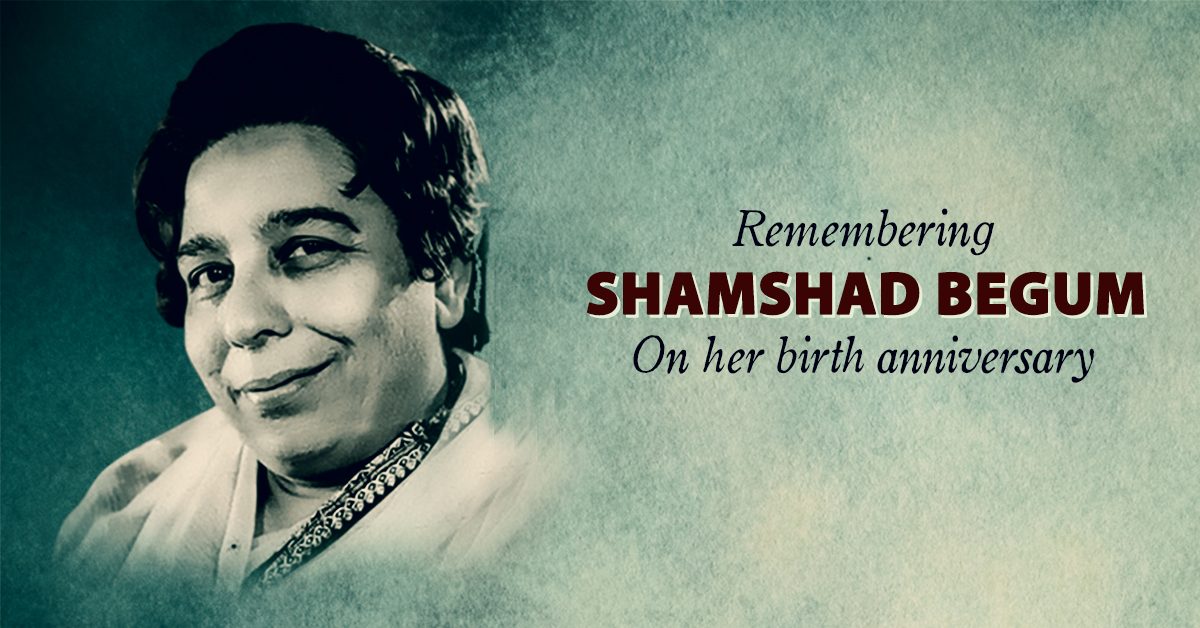 With over 6000 songs in languages like Hindi, Marathi, Gujarati, Tamil, Punjabi, Bengali, Shamshad Begum was a versatile singer with an extraordinary voice. She was one of the first playback singers in the Hindi Film Industry.

Born on 14th April 1919 in Lahore, British India, a day after the bloodshed at the Jallianwala Bagh, Begum lived in a conservative Muslim family of limited means. But young Shamshad was peculiar right from the start, at the age of 15 Shamshad married Ganpat Lal Batto in the year 1934, despite opposition from both their families due to religious differences.

The journey of one of the most unique voice began in the year 1924 when the principal of her school spotted Begum’s talent and made her the head singer for the classroom prayer. The family strictly opposed her singing dream but in the year 1931, 12-year-old Shamshad was secretly taken by her uncle to Xenophone Music Company for an audition with musician and composer

Ghulam Haider. Haider was impressed with her voice and granted her a contract of 12 songs. With this contract, Shamshad Begum became popular. She also sang on the All India Radio in Peshawar and Lahore from 1937. The AIR Lahore became a medium for Begum to enter the world of movies. Impressed by her voice, sarangi maestro Hussain Bakshwale Sahab took her as his disciple.

It was director Mehboob Khan, who bought Shamshad Begum to Mumbai and used her voice for films like Khazanchi and Khandan from the years 1941 and 42 respectively. Haider and Begum worked together for films like Zamindar, Poonji, Shama and also Taqdeer that introducing megastar Nargis. Post-independence, Haider moved to Pakistan and Shamshad Begum became a huge national star. She sang for famous composers like Naushad Ali, O.P Nayyar, C.Ramchandra and S.D. Burman from 1946 to 1960 which were considered her peak years in the industry. Begum was composer Naushad’s favourite and sang many songs for him including four out of twelve songs in Mother India.

Soon Shamshad Begum became the highest-paid playback singer in the industry. Begum also collaborated with Burman for songs like “Kuch Rang Badal Rahi” from the film Shikari and “Pyar Main Tumne” and “Kismat Bhi Bhichadna” from the movie Shabnam, which was the biggest hit by Burman and gave him national fame.

The famous composer O.P. Nayyar described Begum’s voice as ‘Temple Bell’ for its clarity of tone. In the late 60s, Nayyar worked with Begum for songs like “Ab Toh Jee Hone Laga” from Mr And Mrs. 55 and “Main Jaan Gayi Tujhe” from Howrah Bridge. Some of her most famous songs “Mere Piyan Gaye” and “Saiyan Dil Main Aana Re” are being remixed and used in films even today. It was the year 1955 when Shamshad Begum lost her husband and did not record any song till 1957.

She made a successful comeback to films with the song, “Pee Ke Ghar Aaj Pyaari Dulhaniya Chali” for the film Mother India and went on to lend her voice to films like Jaali Note, Love in Simla, Bewaqoof, Mughal-e-Azam, Bluff Master and Gharana. Legendary singer Lata Mangeshkar has just started singing in films and was asked by music producers and directors to imitate Shamshad Begum’s voice.

Shamshad Begum and Lata Mangeshkar also sang many duets together. 1965, was the year when Shamshad Begum declared a self-imposed retirement and since then only gave occasional interviews. She was awarded the Padma Bhushan award in the year 2009. On 23rd April 2013, after a prolonged illness, the Hindi Film Industry lost one of it’s first and versatile playback singers. To relive the unique voice of Shamshad Begum, you could now listen to all the famous songs sung by Shamshad Begum like “Kajra Mohabbat Wala” and “Nathaniya Hale to Bada Maza” with Saregama Carvaan, a digital audio player with 5000+ old Hindi Bollywood songs.

B. R. Chopra – The Man Who Stole Our Sunday Mornings And Hearts!