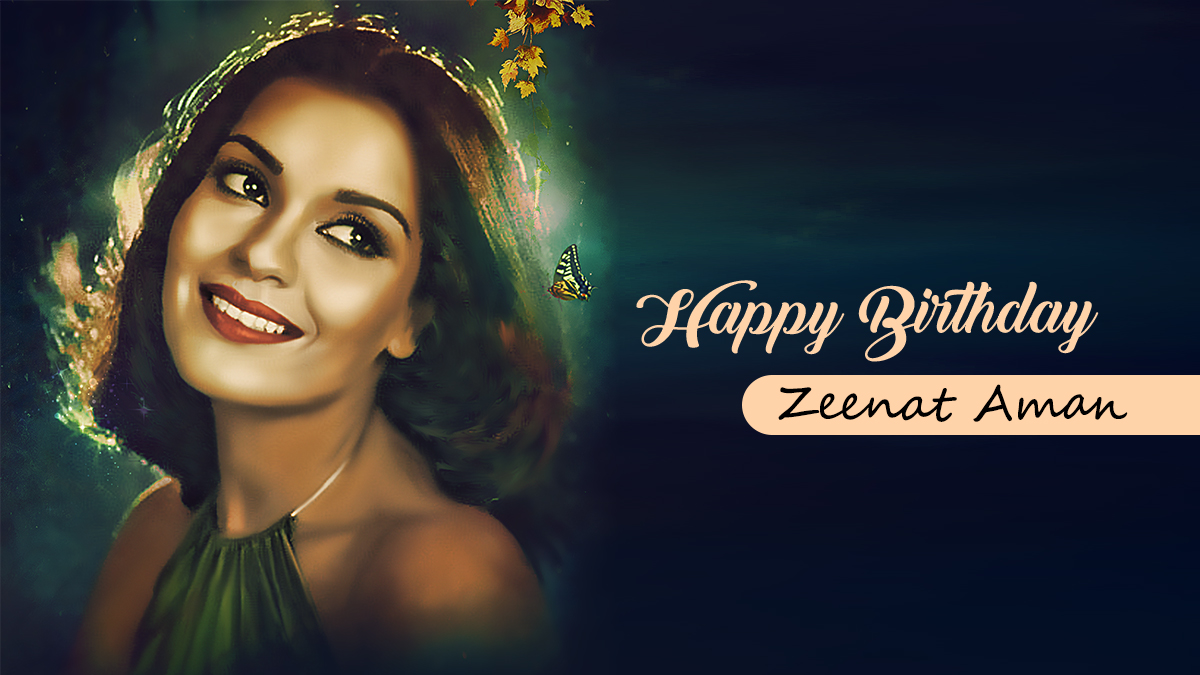 It is impossible to reminiscence the golden era of Bollywood, through the 1970s and 80s without taking the name of legendary Bollywood actress Zeenat Aman. Bold and beautiful, the talented star was as unique as the gamut of cinematic roles she played with perfection.

In many ways, Zeenat Aman was the trendsetter in Bollywood, who with her vivacious personality, glamour and style comfortably combined it with sheer class in her acting. Her career was defined by the women-centric characters with grey shades and was applauded by the pundits and embraced by the audience too. Saregama wishes a very happy birthday to Zeenat Aman, the living legend who turns 70 today.

Once you glimpse into the early life of Zeenat Aman, therein lies, perhaps the source from which her buoyant personality was shaped. Born to Amanullah Khan who was a movie scriptwriter, Zeenat certainly had art and creativity as the center. Her family members, many of them like Raza Murad, were also in showbiz. After her schooling and higher studies, she worked as a model and won Miss Asia Pacific in 1970. At the age of 20, she started bagging acting roles in Bollywood. However, the big breakthrough role came in Dev Anand’s movie Hare Ram Hare Krishna in 1971, which took her to the heights of applauds, fame, and stardom.

In a short span of time, Zeenat became the heartthrob of Bollywood with her exciting and interesting roles, characterized by a unique charm, oomph, and brilliance. She played all her roles with aplomb, whether it was Sheetal in Roti Kapda aur Makaan or Roma in Don. Her acting prowess was on full display in movies like Yaadon Ki Baraat, Satyam Shivam Sundaram, and Qurbani, which put her on a pedestal with the best among the Bollywood legends. Moreover, she had the chance to work with some of the best people in the Bollywood cinema like Dev Anand, Raj Kapoor, Manmohan Desai, and male co-stars Amitabh Bachchan, Dharmendra, and Vinod Khanna, who were all on top of their game at that era.

If one thing defines Zeenat Aman in public memory is high on energy and psychedelic song Dum Maaro Dum. The track from R.D Burman and sung by Asha Bhosle, besides its magnificent music, was powered to a national and international craze by the performance of Zeenat Aman in the song sequence. Generations of movie lovers have been fascinated by the vibes of this iconic song. Many other popular Zeenat Aman songs include Chura Liya Hai Tumne Jo, Aap Jaisa Koi, Laila O Laila, Bheegi Bheegi Raaton Mein, each of which is loved by the audience even today and are evergreen. Now you can listen to the best Zeenat Aman songs on Saregama Carvaan.

She was indeed the one who broke stereotypes in Hindi movies with amazing women-focused roles, and since then, Bollywood hasn’t been the same. Since the 1990s, she has been appearing less frequently in the movies. However, she continues to choose to act today in web series and movies which interest her. A career spanning four decades is not a simple thing, and she hasn’t hung up her boots yet. On Zeenat Aman’s happy birthday, we wish to see many more of her amazing and exciting roles and performances. You can celebrate her birthday by listening to the best Zeenat Aman songs on Saregama Carvaan. Saregama Carvaan is a portable digital audio speaker that comes with 5000 preloaded evergreen Hindi songs that you can listen to any time without ad breaks or an internet connection. It also consists of other features like Bluetooth, FM/AM radio, USB, and AUX connectivity.