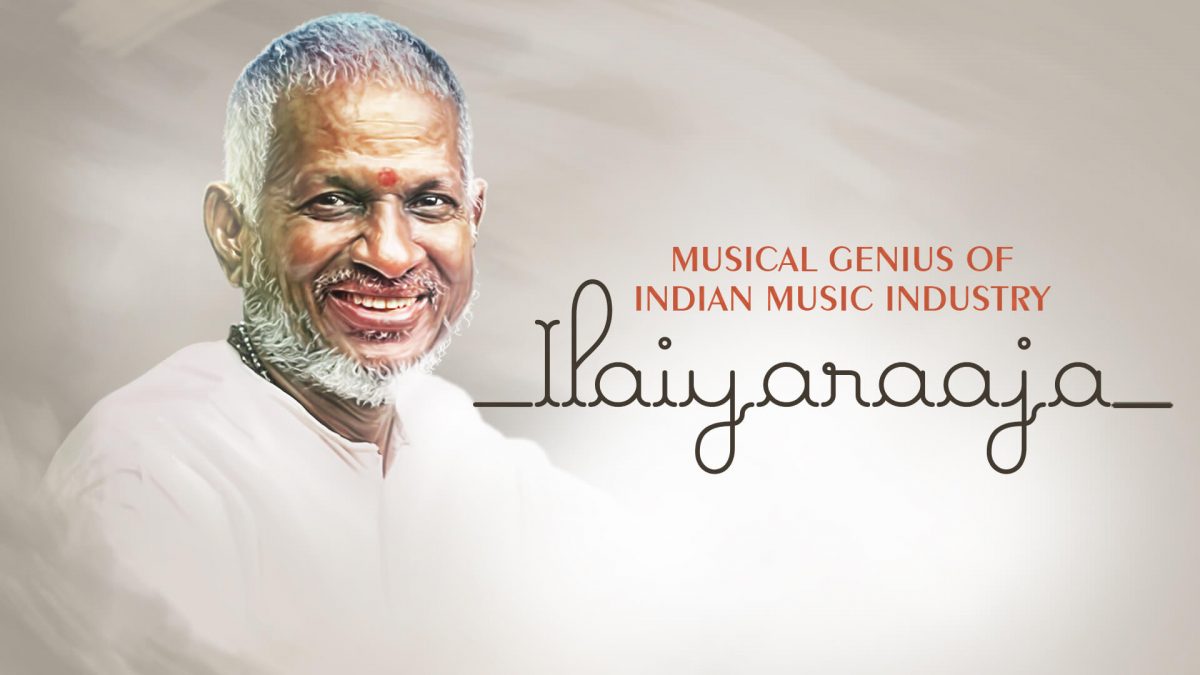 The famous Indian film composer, singer, songwriter, lyricist, orchestrator, and instrumentalist who predominates the Tamil industry and works in the Indian Film Industry needs no introduction. Gnanathesikan or popularly known as Ilayaraja was born on the 2nd of June 1943 in a Dalit family belonging to the Theni District, Tamil Nadu. Growing up in a rural area, he was exposed to the local Tamil folk music. Being brought up around tunes and rhythms piqued his eternal interest in music.

At the age of 14, he joined his older brother, Pavalar Varadarajan’s musical troupe named “ Pavalar Brothers” and went on to tour and travel with them around South India performing and playing music. During the tour, he penned his first-ever composition. Fun fact here, did you know that Ilayaraja is one of the only few composers who write their music notes first before singing them. An immensely difficult feat.

After that in 1968, he joined Dhanraj Master, as a student to learn musical instruments. Dhanraj master later named him “Raaja”. Ilayaraja is also a Gold Medalist in Classical Guitar after completing a distance learning course from none other than Trinity College Of Music, London. He also learned Carnatic music from T.V Gopalakrishnan.

After working for some time as a composer, Ilayaraja got hired by Kannada Film Composer G.K Venkatesh as a musical assistant. He worked on over 200 film projects with him. By 1975, Ilayaraja got commissioned to compose for his first-ever movie “Annakili”, a Tamil production. For the soundtrack of the movie, Ilayaraja created a fusion of Western Popular Music and Tamil Folk Music. His techniques grew in popularity, influencing a new wave of fusion music culture and a massive appreciation for Tamil Folk Music. His popularity kept on growing more and more as he worked. He has worked with some of the greatest lyricists and musicians of all time, some of them being Sitaramasastri, Chi. Udaya Shankar and Gulzar, Singeetam Srinivasa Rao, Bala, Shankar Nag, and R. Balk being some of them.

Ilayaraja ‘s music technique came as a refreshing change in the music industry. His orchestration was described as the synthesis of western and Indian instruments and musical modes. He generated a fusion of the two that broadened the scope of composition by a feat for the Indian music Industry. Ilayaraja mostly used electronic guitars, keyboards, saxophones, flutes, drum machines, MIDI, and rhythm boxes with massive orchestras featuring traditional instruments like veena, venu, tabla, mridangam, dholak, and nadaswaram.

Ilayaraja is reputed to be World’s Most Prolific Composer, having composed over 7,000 songs, worked in more than 1,000 movies, and done over 20,000 stage shows and concerts. He is named “The Musical Genius” in the industry for his unique style of composition. He was one of the earliest artists to use western harmonies with Indian arrangements, broadening the scope of composition for the Indian Music Industry. Ilayaraja has received five National Film Awards, three for Best Music Direction and the other two for Best Background Score. He received a Padma Bhusan in 2010 and a Padma Vibhushan in 2018 for his contributions. He also received the Sangeet Natak Akademi Award in 2012, the high level of honor, given to practicing artists.

Apart from his physical achievements (awards), in a poll conducted by the CNN-IBN celebrating 100 years of Indian Cinema back in the year 2013, Ilayaraja was voted as The All-Time Greatest Film-Music Director Of India. He was also positioned in 9th place on American World Cinema Portal “Taste Of Cinema”. Out of the list of 25 people he was the only Indian on the list.

His composition “Rakkamma Kaiya Thattu” from the movie Thalapathi (1991) was charted to be on the fourth position of 10 Most Popular Songs Of All Time, a poll conducted by BBC and voted by over half a million people from 165+ countries back in 2003.

You can listen to all your favorite Ilayaraja Songs on Saregama Carvaan Tamil. Saregama Carvaan is a digital audio player with 5000 retro Hindi songs. The portable speaker also has some exclusive features like Bluetooth and AUX connectivity.

5 Music Legends Who Popularized Indian Music across the Globe