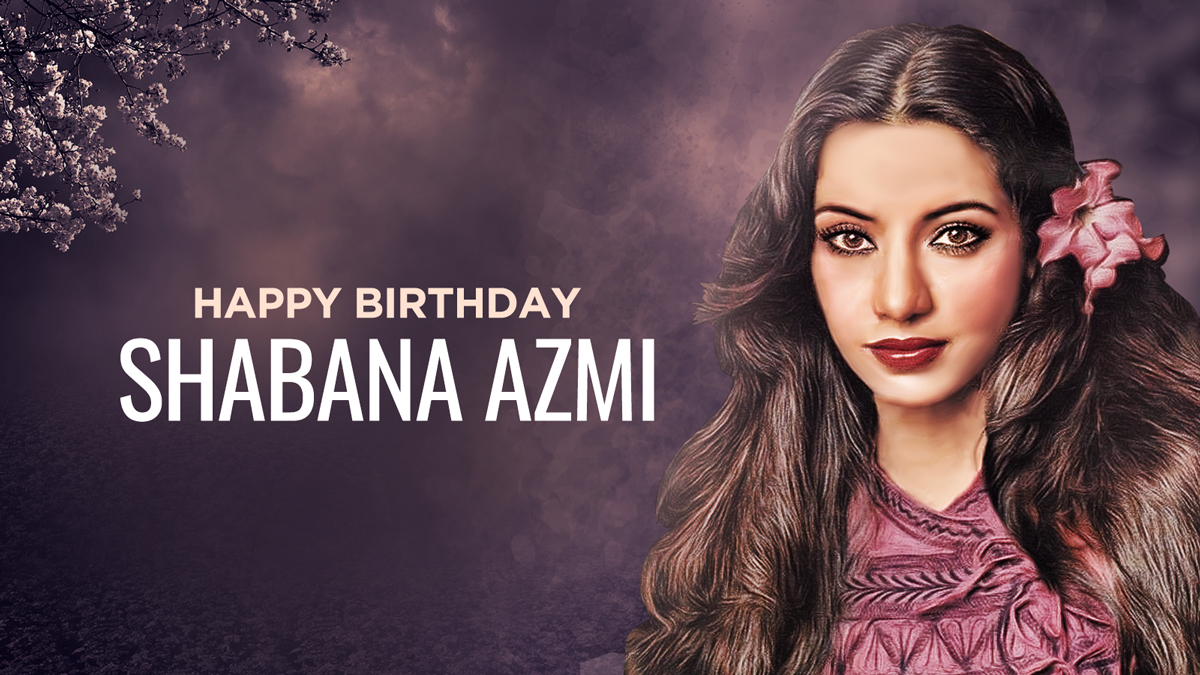 As Shabana Azmi, the most versatile actress of Bollywood, celebrates her 71st birthday today, we take a look at her exciting journey so far as a Bollywood icon on the big screen as well as an inspiring figure off it.

Shabana Azmi was born into an artistic family. Her father was a well-respected and popular Urdu poet and lyricist Kaifi Azmi, and her mother, Shaukat Azmi, was a stage actress. Without a doubt, the artistic personalities around her greatly influenced her childhood and captured her attention while growing up. Later, she joined the Film and Television Institute of India (FTII), Pune, for an acting course that paved the way for her in Bollywood.

When the right time came, she made her debut as an actress in the movie Ankur 1974. Those were the days when parallel cinema was making big waves in India and this movie was highly praised and received critical acclaim. Shabana played the bold character of Laxmi with aplomb, and the rest is history. She went on to win the National Film Award for Best Actress for this movie and four more throughout her career till now.

During the 1970s and 80s, it was difficult for such movies to shine in India. But the magic and versatility of actors and actresses like Shabana Azmi, Naseeruddin Shah, Smita Patil made it happen. Many of her movies dealt with bold topics, and her experimentation with roles made her popular. In her career spanning more than four decades, some of her most popular movies include Shatranj Ke Khiladi 1977, Sparsh 1980, Mandi 1983, Fire 1996, Godmother 1999, 15 Park Avenue 2005. Arth and Masoom in 1983 deserve special mention as these movies catapulted her into the next level both in cinema as well as her social life.

Some of the best songs pictured on her include Tujhse Naraz Nahin Zindagi, Mere Dil Mein Tu Hi Tu Hai, Do Naina Aur Ek Kahani, Ajnabi Kaun Ho Tum, Pal Bhar Mein Yeh Kya Ho Gaya. You can listen to these amazing songs on Saregama Carvaan. You can celebrate Shabana Azmi’s Birthday by listening to her songs, one can download high-quality mp3 songs from saregama website.

What makes Shabana Azmi a rarity in Indian cinema is that she not only conquered parallel cinema but she was equally successful in traditional Bollywood movies as well. Films like Amar Akbar Anthony was one of them. She acted in a vast number of international films such as The Bengali Night, Madame Sousatzka, City of Joy, In Custody and others.

Another thing that defined her early life was the social and human values that she imbibed from her parents. It greatly impacted her, and she continues to fight for different social issues and causes as a social activist today. Many in the Bollywood industry are enamored by its fame and glory, while others have used it as an opportunity to serve the larger purpose of serving humanity and working for social change. And Shabana Azmi has certainly taken the latter route.

As for personal life, she married the famous Bollywood lyricist, poet, and scriptwriter Javed Akhtar in the year 1984. Since then the couple has been in the limelight for their amazing work, different social causes, and as stalwarts of the Bollywood industry. As mentioned, she continues to work for girl education, communal harmony, social justice, upliftment of the poor, and many such causes.

Saregama wishes a very Happy Birthday to Shabana Azmi, and hope that we see more of her powerful performances in the future. You too can celebrate her life and work by listening to the best Shabana Azmi songs on Saregama Carvaan.

How Can You Celebrate Friendship Day in 2022