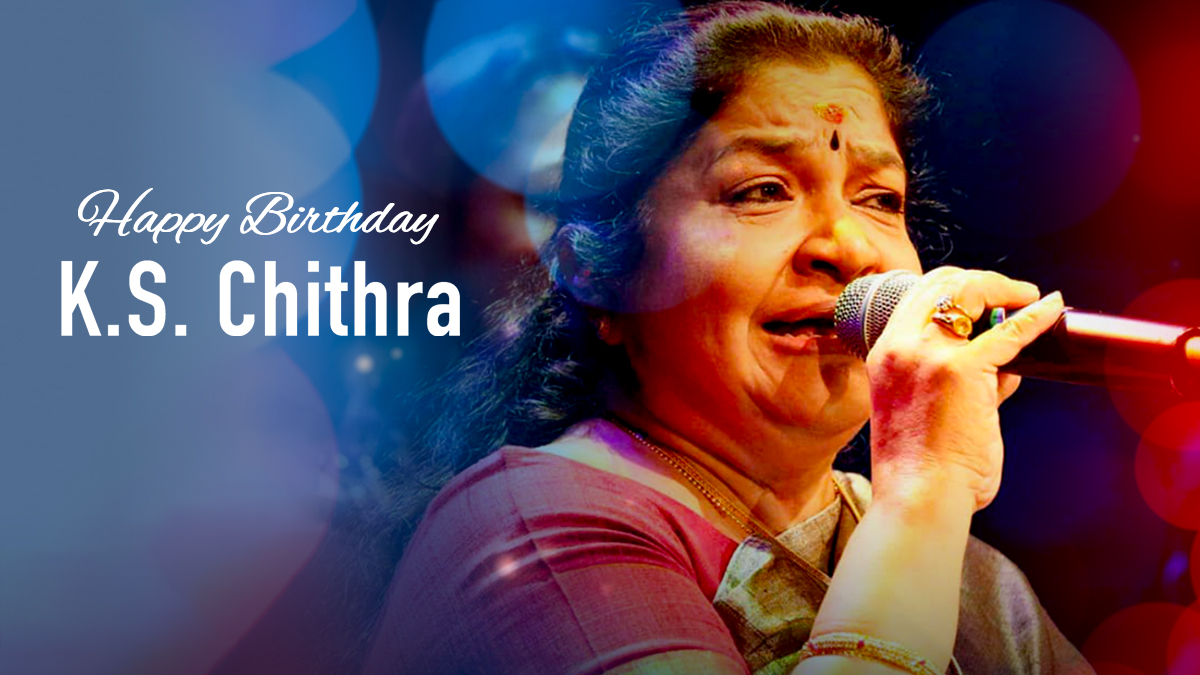 Krishnan Nair Shantakumari Chithra or popularly known as K.S Chithra or Chithra is an Indian Playback singer and Carnatic musician. In her career spanning over four decades, she has recorded over 25,000 songs in multiple languages like Hindi, English, Urdu, Bengali, Tamil, Telugu, Malayalam, Kannada, Punjabi, Gujarati, Tulu, Rajasthani, Sanskrit, Latin, Arabic, and French amongst others. She is regarded as a cultural icon in Kerala and is fondly called the Melody Queen, remembered and loved for her sweet voice and her sweet nature. She is also known for her extensive history of collaboration with big music composers like SP Balasubramaniam, KJ Yesudas, M.M Keeravani, Hamsalekha, Ilaiyaraaja, and A.R Rahman.

Krishnan Nair Shantakumari Chithra was born on the 27th of July 1963 into a family of musicians, her first teacher was her father. Chithra received professional training in Carnatic music from Dr. K. Omnakutty and based a B.A in music with first-class and third rank from the University Of Kerala. She then went on to complete a Masters in Music and was also selected in the National Talent Search Scholarship from the Central Government from 1978 to 1984.

K.S Chithra is the recipient of six National Film Awards, eight Filmfare Awards South, and over 36 different state awards, winning awards from all four South Indian states. She was also honored with Padma Shri in 2005 and in 2021 she received the third-highest Indian civilian honor; Padma Bhusan for her contribution to the Indian Musical Fraternity. But her awards and accolades don’t just end there, K.S Chithra is also, the first Indian woman who was honored by the House Of Commons, British Parliament, the UK in 1997, and the one and only singer from India who was honored by the Government Of China at the Qinghai International Music and Water Festival in 2009.

In 2001, she received the highest honor of Rotary International “For The Sake Of Honour Award” and has received the MTV Video Music Award for the International Viewer’s Choice at the Metropolitan Opera House in New York amongst other awards and her song Kannalane/Kehna Hi Kya from the movie Bombay in 1995, is included in the Guardian’s “1000 Songs Everyone Must Hear Before They Die” list.

On the occasion of Chithra’s 58th birthday, Saregama wishes a happy birthday to the Nightingale of South India and celebrates her valuable contribution to the Indian Music Industry.

Now you can play all your favorite Chithra songs on Saregama Carvaan Tamil. Saregama Carvaan Tamil is a portable digital audio player that comes with 5000 preloaded evergreen Tamil and Hindi songs that you can enjoy anytime without ad breaks or an internet connection. It consists of other features like Bluetooth, FM/AM radio, USB, and AUX connectivity.

Wishing a Happy Birthday to the Prince of Romance - Armaan Malik

Remembering The Price Of Ghazals, Madan Mohan On His 97th Birth Anniversary

Impact of Music on One’s Life

Wishing to the Man with a Magical Voice, Suresh Wadkar on his 66th Birthday