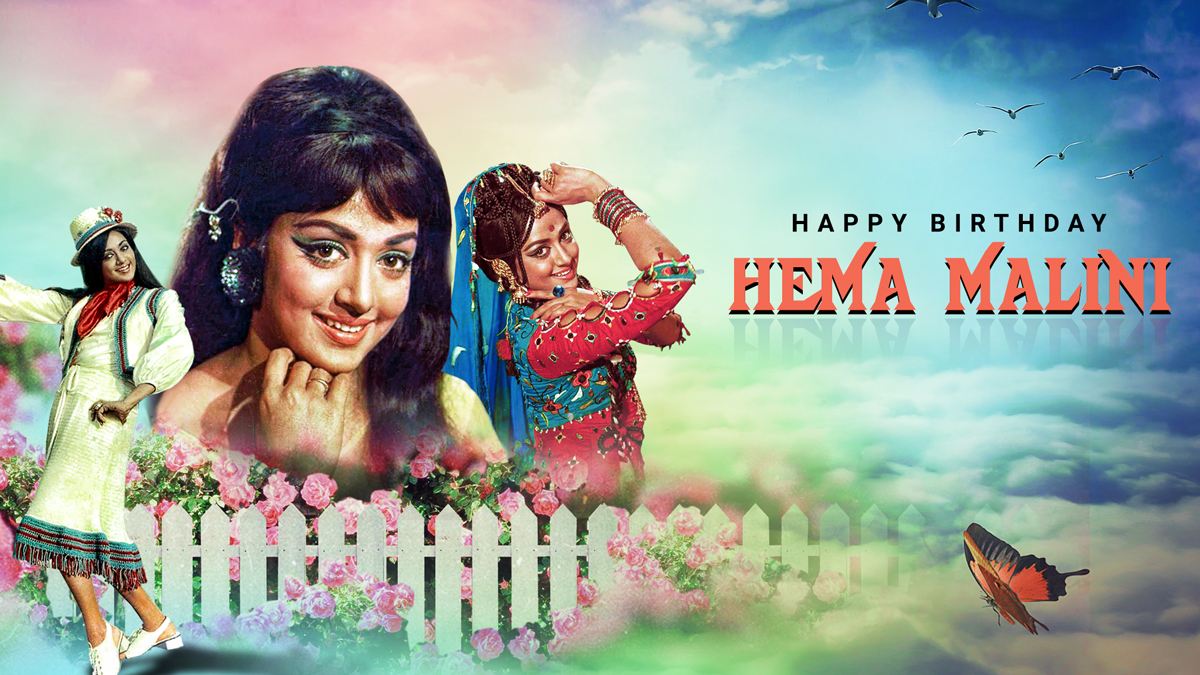 An Indian actress, writer, director, film producer, politician, and dancer, Hema Malini was launched as the “Dream Girl” of Hindi Cinema and for decades she has retained that image. Popular for her roles in comic and dramatic movies like Sholay, Hema Malini has been at one point, one of the most successful Bollywood actresses.

Born on the 16th of October 1948 in a Tamil Iyenger, in a Brahmin family in Srirangam, Malini attended the Andra Mahila Sabha in Chennai, pursuing her education but when she was in her eleventh standard, she quit to pursue acting full time.

In the 1960s, Malini started her acting career with minor roles in movies like Idhu Sathiyam (1962), and Pandav Vanavasam (1965). But her debut as the female lead came in the form of Sapno Ka Saudagar in 1968, starring opposite Raj Kapoor. This was the time, Malini was promoted as “Dream Girl” for the movie.

The following movies like Jhonny Mera Naam (1970), Andaz (1971), and Lal Patthar (1971) saw Malini playing the lead, thus establishing her as a leading actress in Hindi Cinema. Then came her breakthrough with her double role in 1972’s superhit film Seeta Aur Geeta, starring opposite Dharmendra and Sanjeev Kumar. The movie earned Hema Malini her first Filmfare Award for Best Actress for the film and was also the beginning of her long list of films starring opposite actor Dharmendra, whom she married later on.

The era between the 1980s and 1990s saw the commercial success of Hema Malini. She continued to star in many big-budget films like Rajput, Satte Pe Satta, Naseeb, and Kranti. And even though she married Dharmendra in 1970 and became a mom, she continued to work even after, giving out women-centric films like Sitapur Ki Geeta, Aandhi Toofan, Ramkali, Jamaai Raja, Ek Chaddar Maili Si, Rahee, and Durga.

Apart from acting, Hema Malini entered the realm of producing and directing films in the 90s. She produced and directed the 1992 film Dil Aashna Hai, starring Divya Bharti and Shah Rukh Khan followed by her 1995 directorial Mohini. Mohini saw the last of Malini’s talents before she completely switched to dancing and television, only making occasional appearances in the films.

After taking several years off acting, Hema Malini made a comeback with her 2003 family drama Baghban which was a box-office superhit, earning her, her Filmfare Best Actress nomination. She also made several guest appearances in films like Veer Zara, Laga Chunari Mein Daag, Sadiyaan with fellow actress Rekha. Her latest appearance has been in the 2020 movie Shimla Mirchi starring Rajkumar Rao and Rakul Preet Singh.

Steering from her acting career, Hema Malini has been an active member of the Bharati Janta Party since 2004. From 2003-2009 she served as an MP to the upper house – The Rajya Sabha. In 2010 she was made the General Secretary of BJP and she won the 2014 Lok Sabha elections defeating Mathura incumbent and was then elected to the Lok Sabha.

Hema Malini has been the commercial face of the Livepure aqua guard brand, along with that, she is an active PETA member, fighting for animal rights.

During her career, Hema Malini received eleven Filmfare nominations for the best actress award, winning it in 1973. She received the Filmfare Lifetime Achievement Award in 2000 and 2019 she received the Filmfare Special Award for 50 Years of Outstanding Contribution. She has also served as the chairman of the National Film Development Corporation and she was honored with the Padma Shri given by the Government of India.

On the occasion of Hema Malini’s birthday, Saregama wishes her a hearty birthday and celebrated her contribution to the Indian cinema.

Now you can stream top Hema Malini songs on Saregama Carvaan. Saregama Carvaan is a portable digital audio speaker that comes with 5000 preloaded evergreen Hindi songs that you can enjoy anytime, anywhere without ad breaks or an internet connection. It also consists of other features like Bluetooth, FM/AM Radio, USB, and AUX connectivity.