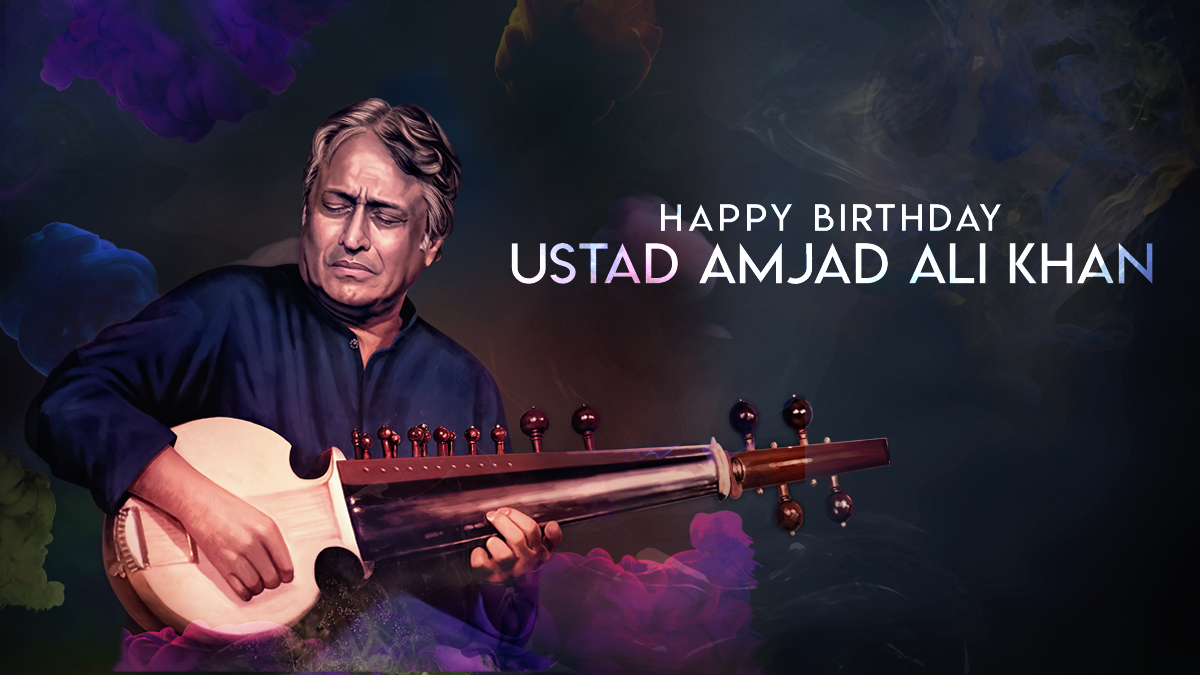 Being the youngest son to seven children of the Gwalior court musician Hafiz Ali Khan and Rahat Jaan, his family is a part of the Bangash lineage and Ustad Amjad Ali Khan is the sixth generation of musicians. His family associations run so far back that his family acclaims to have invented the musical instrument Sarod.

Growing up, Ustad Amjad Ali Khan trained under the guidance of his father and in 1957, when the cultural organization in Delhi appointed his father, the family moved to Delhi. His father Hafiz Ali Khan was trained by the descendants of Tansen, the Nav-Ratna (nine-gems) magical musician in the court of Akbar: The Mughal Emperor. Thus, Ustad Amjad Ali Khan belongs to the lineage of Tansen; the magical musician.

His father understood the importance of formal education and hence, a young Amjad Ali Khan was enrolled as a day scholar in the Delhi Modern School where he received his formal education from 1958 to 1963.

As a young adult, Amjad khan had romantic relations with an older woman that lasted for nine years. Although they did not marry, Amjad stayed in a platonic friendship with her. This led to marital problems between him and his wife and they separated in 1975. His first daughter from his first wife was raised by his brother who was childless.

The following year, Ustad Amjad Ali Khan remarried the Bharatanatyam dancer Shubhalakshmi Barooah with whom he has two sons; Amaar and Ayaan. He trained both his sons in music and they work together, playing concerts.

Khan’s musical journey started in the 1960s when he first performed in the United States of America in 1963. Ever since then, Ustad Amjad Ali Khan has continued to perform in the US with his sons. Known for his clear Ekhara taans and his mastery over his Sarod, Ustad Amjad Ali Khan is known for having experimented with modifications to his instruments throughout his career. He has also played with the Hong Kong Philharmonic orchestra and taught as a visiting professor at the University Of New Mexico. In 2011, Ustad Amjad Ali Khan also performed on Carrie Newcomer’s album titled “Everything Is Everywhere”

Ustad Amjad Ali Khan has also trained his sons to be a part of his crew and together they played at the 2014 Nobel Peace Prize Concert, performing his “Raga For Peace”.

When it comes to Ustad Amjad Ali Khan’s list of awards and accolades, the list runs long. In 1975, he received the Padma Shri, given by the Government of India. In 1991, the government of India honored him with the Padma Bhusan and the Padma Vibhusan in 2001. Apart from this, he received the Sangeet Natak Akademi Award in 1989 followed by the Sangeet Natak Akademi Fellowship in 2011. In 2004 he received the Fukuoka Asian Culture Prize and in 1989, the U.S state of Massachusetts declared 20th April as Amjad Khan Day. He has also been awarded the 21st Rajiv Gandhi Sadbhavna Award along with that, Ustad Amjad Ali Khan is made an honorary citizen of Houston, Texas, and Nashville, Tennessee in 1997, and of Tulsa, Oklahoma in 2007. In 2011, he also received the Banga-Vibhushan.

And in 1990, Gulzar directed an Indian documentary film titled Ustad Amjad Ali Khan, based on the Sarod player that won the 1990 Filmfare Best Documentary Award.

On the occasion of Ustad Amjad Ali Khan’s birthday, Saregama wishes him good health and celebrates his contribution to Indian Classical Music.

Now you can listen to the best of Ustad Amjad Ali Khan’s music on Saregama.